150 years after Dmitri Mendeleev presented his periodic table of chemical elements, the famous table is still the focus of intense research activity. After having gradually identified all the elements, researchers are now synthesising new elements. The four newest joined the table in 2016, bringing the total to 118, and the hunt for ‘superheavy’ elements continues. This search is at the core of wide-ranging international collaborations between researchers, theorists and experimenters, chemists and physicists, but it also sparks rivalries between countries and between scientific communities. What are the stakes of this research that has been pursued over the centuries? 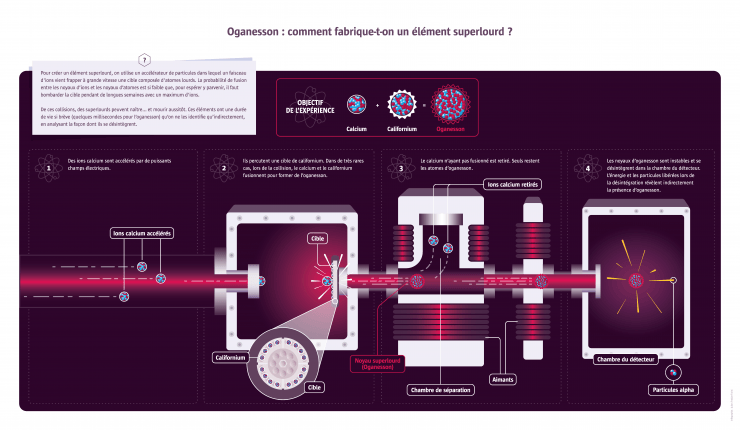 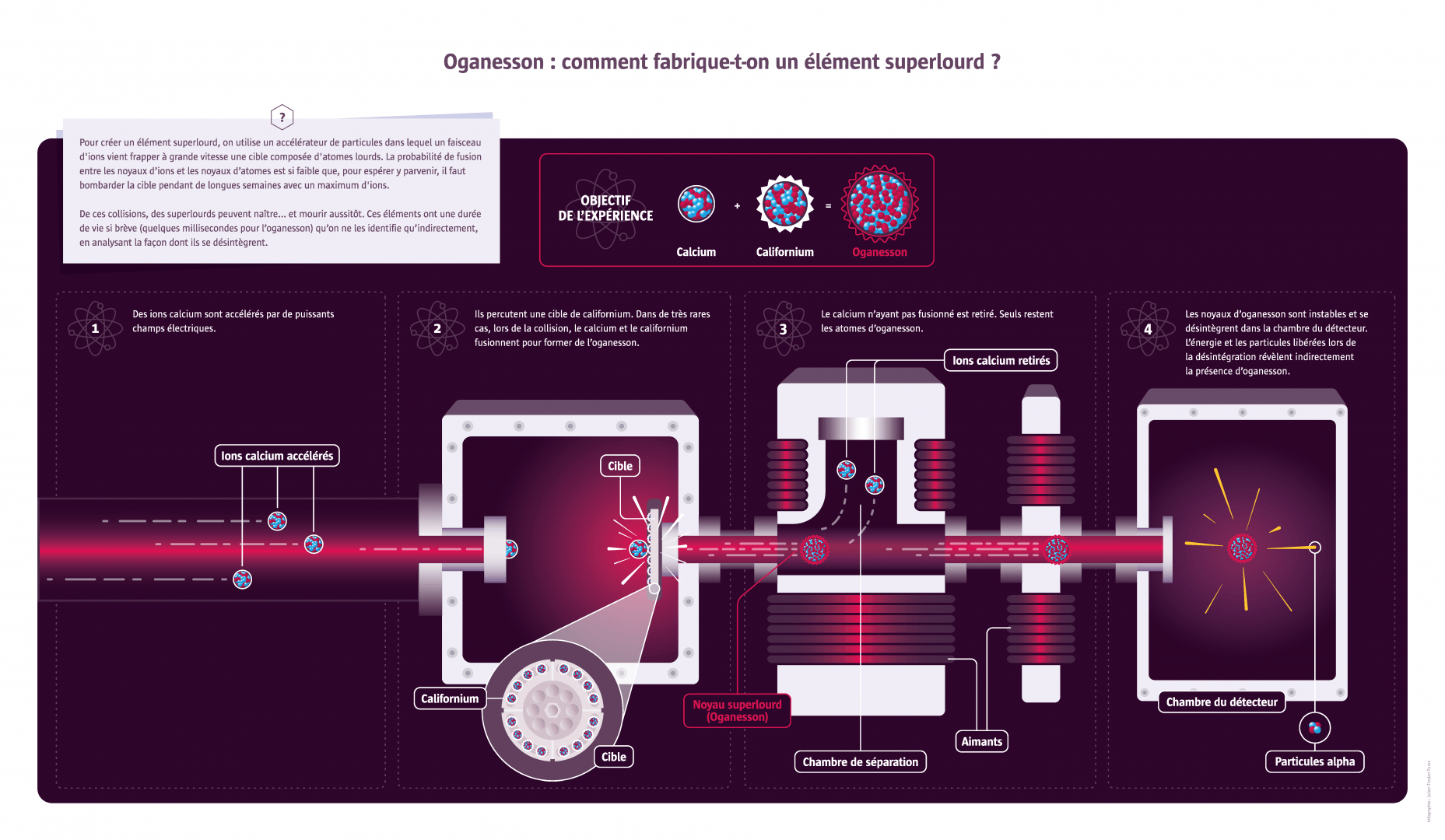 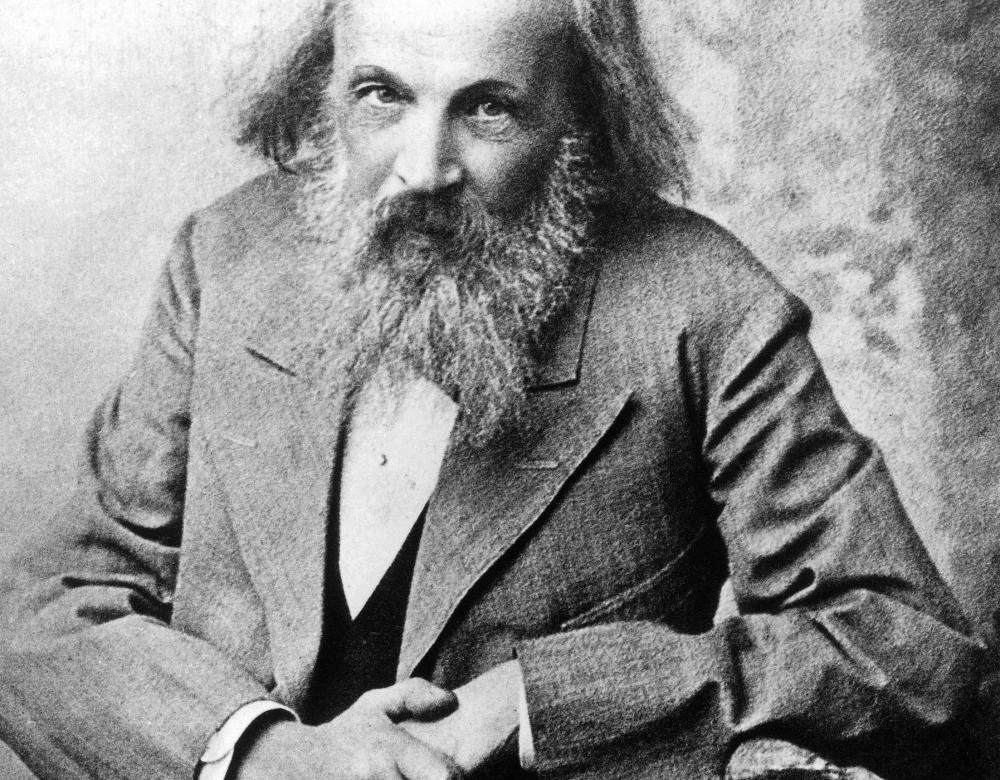 In 1869, Russian chemist Dmitri Mendeleev published a classification in six rows of the sixty elements then known. The idea of a regularity in the properties of the elements was in the air at the time: French chemist Chantcourtois had already proposed a classification in 1862 and many others made similar attempts thereafter. But Mendeleev’s classification involved several improvements, including leaving gaps in the table that enabled him to predict the existence of new unidentified elements and their properties. It would take nearly 150 years of research to complete the array of 118 elements in seven lines. Researchers are now working on the eighth row.

Elements, at the core of matter

Like the pieces of a construction game, a hundred or so chemical elements produce, by their combinations, the infinite variety of matter.

In 1789, French chemist Antoine Lavoisier defined the word ‘element’ as ‘a simple body that cannot be broken down’ – a definition that is compatible with what we know today about the atomic structure of matter. Everything that exists on Earth and in the Universe comes from the combinations of these elements. Some substances consist of a single element; this is true, for example, of metals (iron, copper, gold, etc.), coal (in the form of anthracite) which is pure carbon, and certain gases (nitrous oxide and oxygen in the air, dihydrogen). Other substances are composed of several elements, as is the case of water, 1/3 oxygen and 2/3 hydrogen. Some chemical elements abound on Earth – the most abundant in the ocean is hydrogen; in the Earth’s crust, it is oxygen – others are very rare, like astatine of which there are only a few grams on our planet. A large number of elements have been isolated from known substances. Others were unsuspected until they were identified by chemists, such as argon, a ‘noble gas’ in the air. The most recent elements discovered by physicists do not exist in nature. They are very unstable and disintegrate very quickly after being formed. They are synthesised in the laboratory in particle accelerators 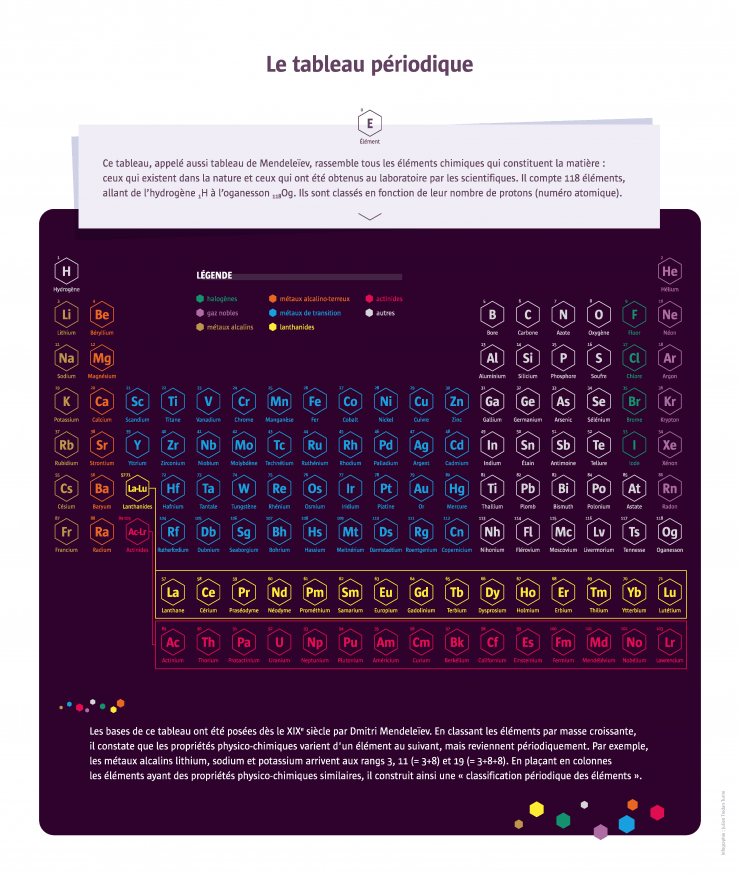 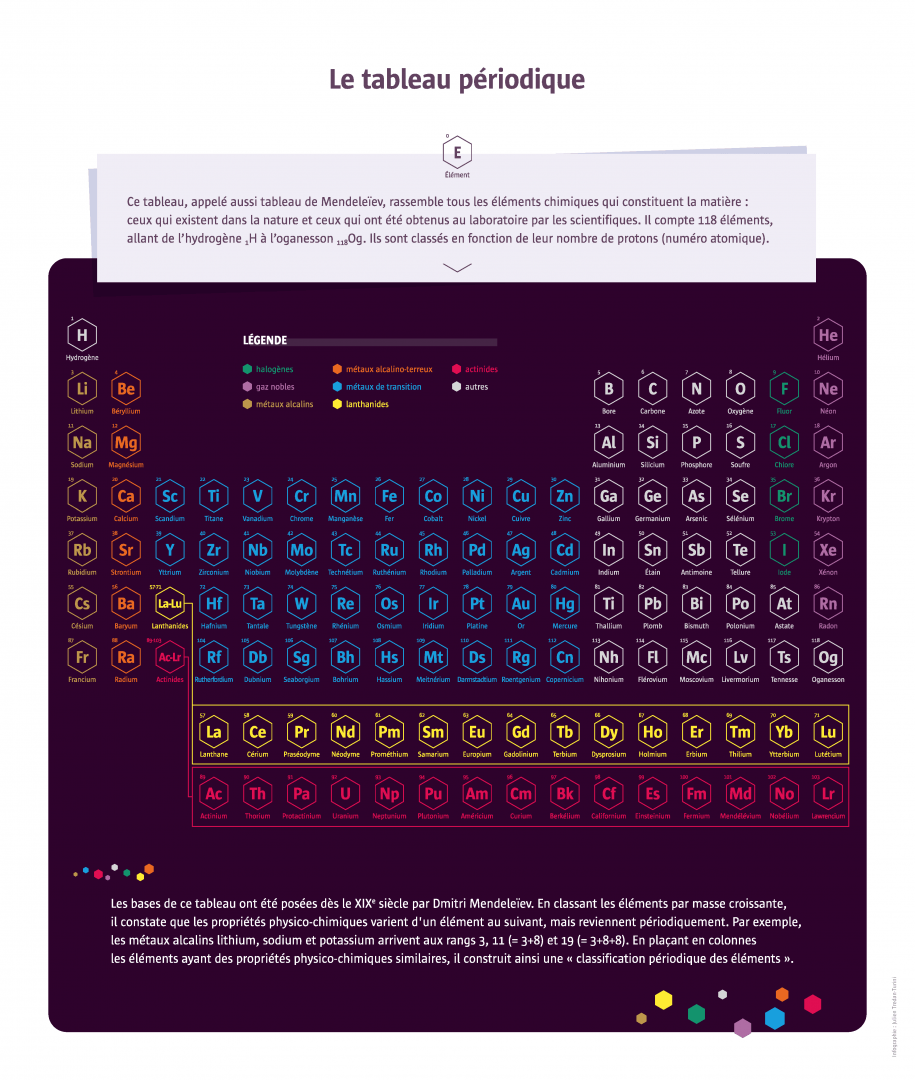 Some elements date back to the first moments of the Universe, but most are the result of nuclear reactions in the core of stars.

About 13.7 billion years ago the Big Bang took place… In a fraction of a second a great many particles were formed, including protons and neutrons. After a few minutes, they coalesced to form light elements, with hydrogen, consisting of a single proton, then vastly predominant, and helium, made up of two protons and two neutrons, constituting 25% of matter. Traces of lithium were also present. For heavier elements to form, the nuclei had to be forced to fuse electrical charges that repel one another. This required considerable energy, which would only be found much later, at the core of stars. All the elements we know – carbon, oxygen, iron, etc. – were formed there. When a star dies, it explodes and projects into space all these elements, which are found in the following generations of stars and planets. Of those formed in the stars, some are unstable, or radioactive, and disintegrate spontaneously after a span of time that characterises that element. On Earth, only three radioactive elements subsist from the origin of the planet thanks to lifespans of several billion years: potassium 40, uranium and thorium. Some radioactive elements with shorter half-lives are formed continuously, such as radium (1,600 years) from the decay of uranium, or carbon 14 (5,700 years). But for most radioactive elements, the only means of observation is through synthesis in the laboratory, by recreating at a very small-scale conditions similar to those of stars.

The shock breakout of supernovae!

When it comes to the production of chemical elements, not all stars are the same. An average star, like the Sun, produces helium from hydrogen for most of its life. Once the hydrogen is depleted, it creates heavier elements in a short time, up to oxygen for the Sun, and even up to iron for a larger star. Elements heavier than iron require so much energy they can only form in very massive stars just before they explode. The final explosion, during which these elements are dispersed in space, is called a supernova. Like this one, photographed by the Hubble Space Telescope in the constellation Virgo. 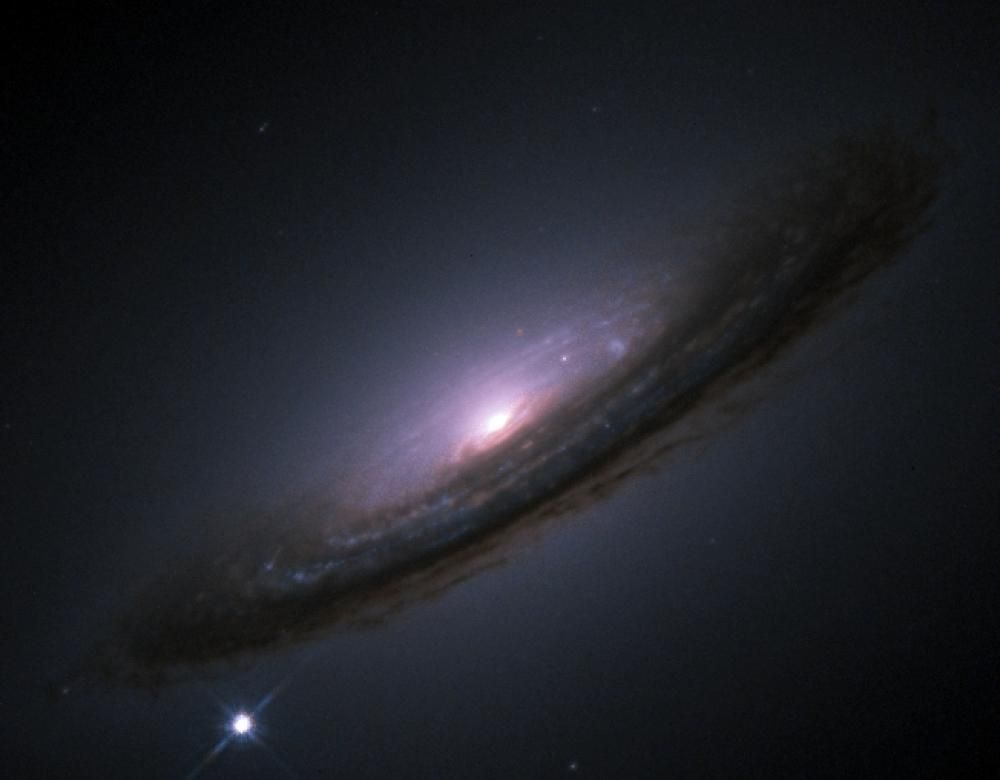 The race for superheavy elements

Creating new increasingly heavy elements is a real scientific challenge, and one with geopolitical stakes.

After the Second World War, which revealed the potential of uranium (the heaviest element found in nature) for civilian and military applications, the United States and the USSR engaged in a race to find the heaviest possible elements. This was also a way for them to demonstrate technological superiority. Between 1947 and 1980, American institutes in Berkeley and Los Alamos and the Soviet research centre in Dubna each discovered half a dozen new elements, sometimes nearly at the same time, which gave rise to quarrels over anteriority. They were soon joined by Germany and Japan. The last element synthesised by physicists was oganesson, with 118 protons and 176 neutrons. The new element was discovered in 2012 (and officially named in 2016) in Dubna by a joint team of Russian and American scientists, testifying to the change in relations between the participating countries and the globalisation of research. Nowadays scientists are searching for superheavy elements not so much for reasons of prestige or for their potential applications as to gain a better understanding at a fundamental level of the forces governing the cohesion of matter. Scientists have a general theoretical understanding of why heavier nuclei have quite short lifespans, but certain subtleties remain to be validated. Thus, some superheavy nuclei with very specific numbers of protons and neutrons may be exceptions to the rule and be much more stable, lasting a few minutes or even years without disintegrating. Verifying this experimentally is the current scientific and technical challenge. 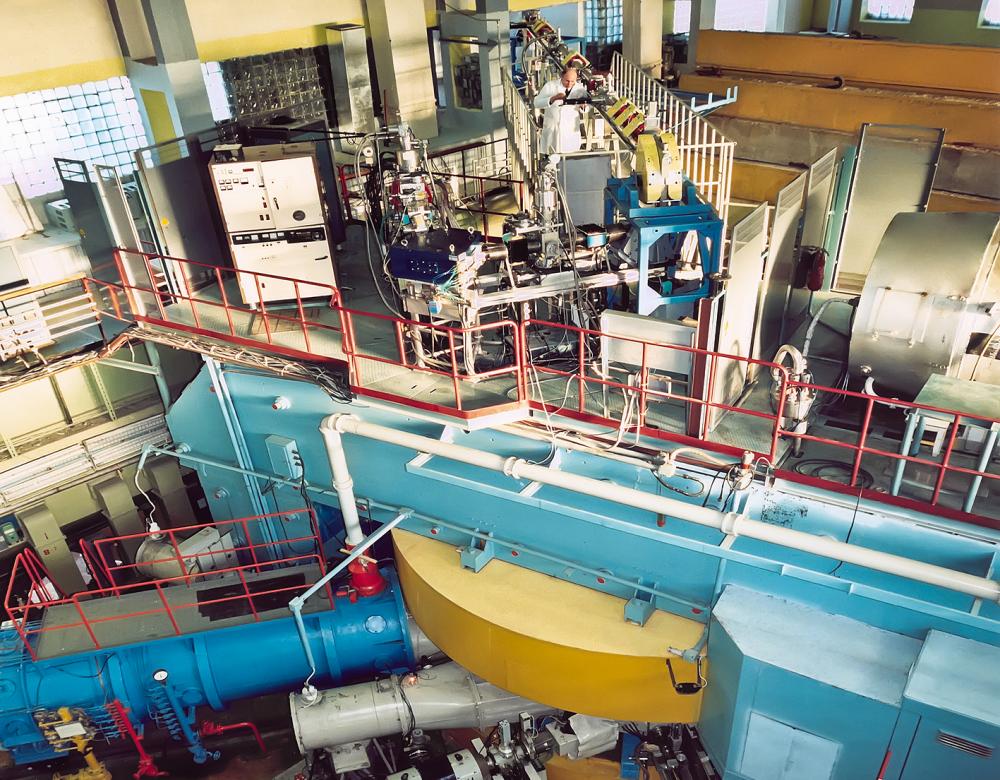 Record of heaviness in Dubna

Founded in 1956, the Joint Institute for Nuclear Research in Dubna, Russia has more than 1,000 researchers from 18 countries. Several superheavy elements were synthesised there, including the heaviest element currently known: number 118. In 2016, after a decade of verifications, number 118, along with elements 113, 115 and 117, were officially added to fill the gaps in the periodic table. It was named oganesson in honour of Yuri Oganessian, a pioneer in this type of research at the institute.

This particle accelerator (Rilac) from the Riken Institute has made it possible to synthesise the element 113, called nihonium: ‘nihon’ (like ‘nippon’) is the Japanese term for Japan. The lifespan of superheavy elements is too short for them to be observed directly. But the signal they emit when they disappear and are transformed after multiple disintegrations into a more stable element can be detected. By measuring the energy of the particles emitted during this chain reaction and looking at the final, stable product, the process can be recreated and the nature of the element initially created can be identified. This complex process often leads to controversial interpretations. 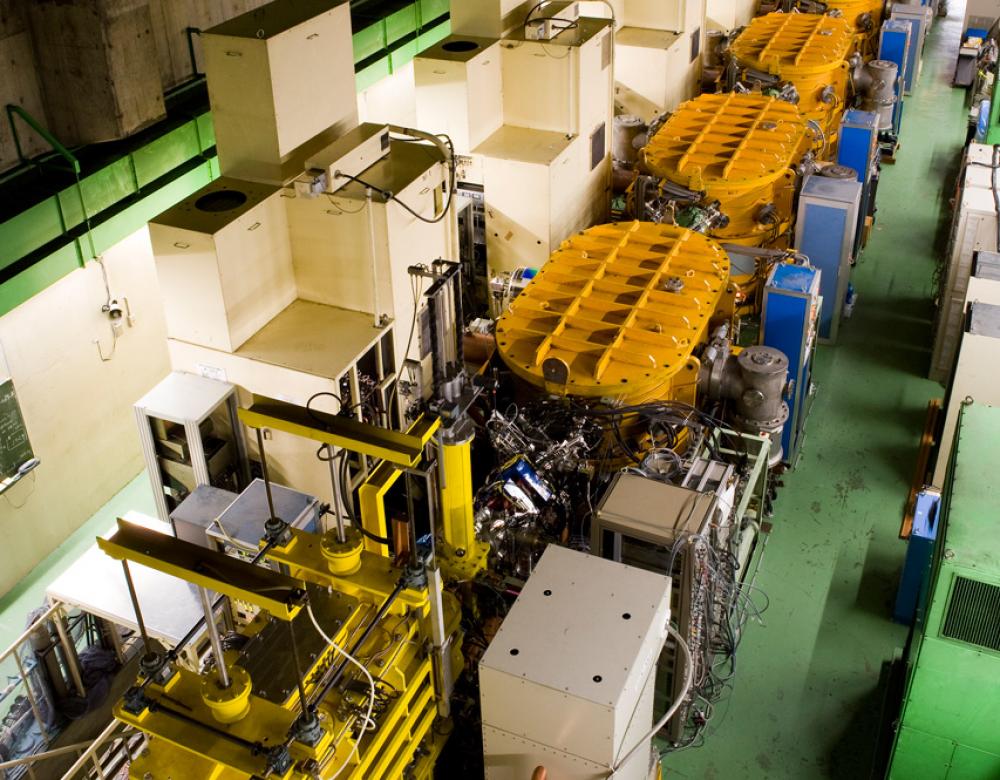 Squabbling over the table

Identifying natural elements is the work of chemists, synthesising new ones is the job of physicists: sister communities but sometimes rivals Historically, chemists were the first to discover and study the elements of the periodic table.

It is a tradition, therefore, that the International Union of Pure and Applied Chemistry (IUPAC) is involved in validating newly discovered elements. However, in recent decades, physicists have been the ones to synthesise and characterise new elements, including such superheavy elements as nihonium, moscovium, tennesse and oganesson. Because these elements are very unstable, they cannot be identified by chemical properties. This change in the characterisation of elements been accompanied by a shift from chemists to physicists in this area. Thus, the International Union of Pure and Applied Chemistry (IUPAC) and the International Union of Pure and Applied Physics (IUPAP) have been competing for the discovery of new elements, with each accusing the other of announcing them without sufficient scientific proof. In May 2018, the two organisations finally agreed that they would henceforth announce discoveries together based on the findings of a panel of experts: the Joint Working Party. 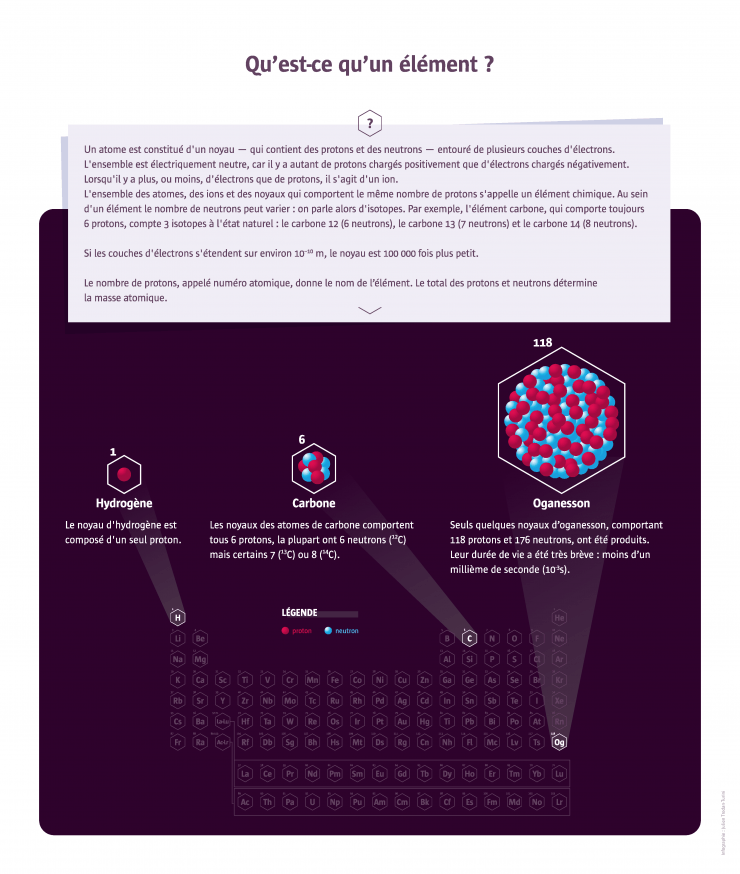 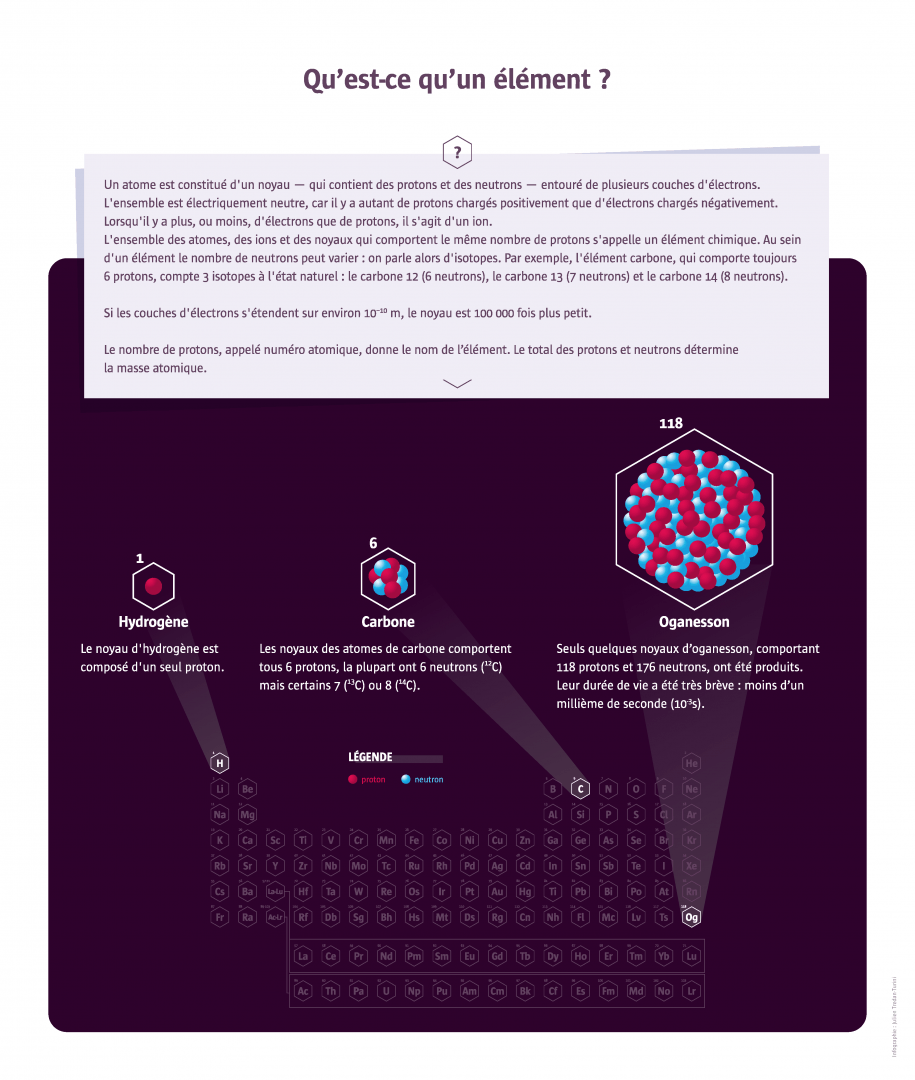 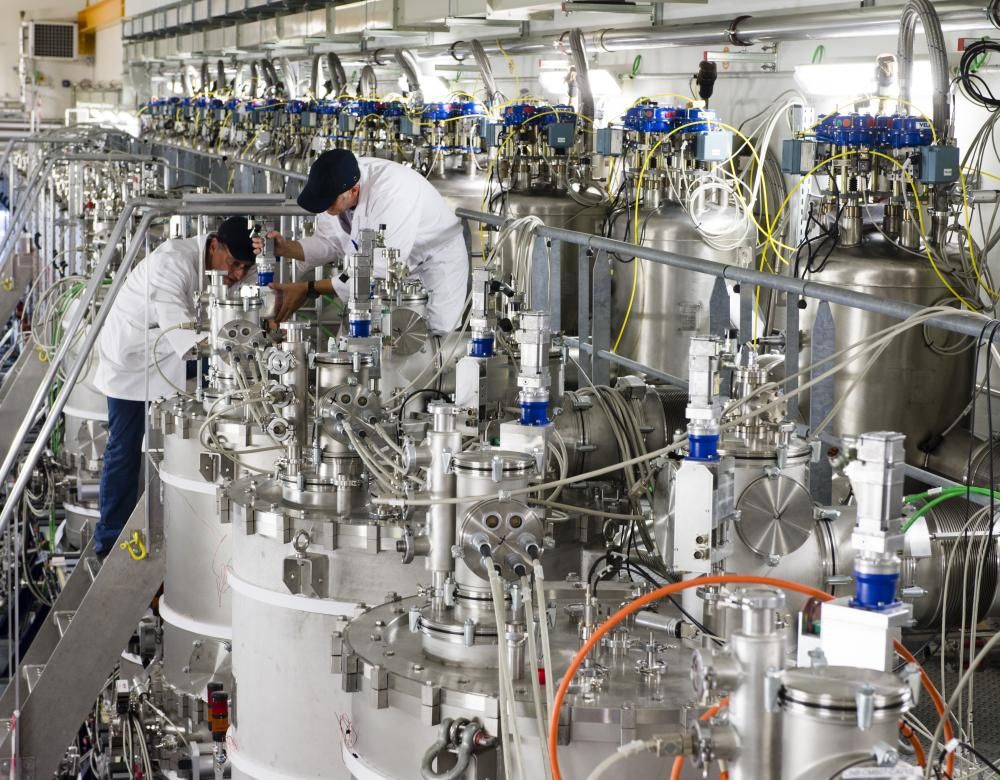 Ganil (Large Heavy Ion National Accelerator) is a laboratory in Caen for research in nuclear physics, one of whose objectives is to produce superheavy elements. In 2008, researchers reported producing nuclei containing 120 and 124 protons, but their lifespan of 10 to 18 seconds was considered too short to constitute new elements. A new generation facility, Spiral2, was inaugurated in 2016 to create even heavier nuclei, which some theories predict could be more stable than the previous ones.