Hydropower may not be the star of energy transition, yet its role is far from secondary. It is the world's first source of renewable energy, and the only one that allows for energy storage. In developing countries there is still room for major projects – on condition that due attention is paid to the environment, to local populations and to biodiversity. On the other hand, most of the available sites in industrialized countries, where exploitation began in the 19th century, are now equipped. Which does not mean that hydropower has said its last word: mobilizable in minutes, it is the natural complement of such intermittent energy sources as wind or solar, which are now booming.

A key role in energy transition

In France, nuclear power was given priority – and the country stands alone in this respect – so much so that it accounts for three-quarters of annual electricity consumption as compared to 13% for hydropower. But so-called ‘renewable’ sources, that is natural inexhaustible energy sources, are gaining ground. The French energy transition bill, adopted on 17 August 2015, set the goal of reducing the nuclear energy share from 75% to 50% by 2025 (postponed to 2035 in January 2019). Meeting this target requires developing alternatives. The bill also calls for a 40% reduction in greenhouse gas (GHG) emissions (as compared to 1990), and dams produce hardly any at all (1). Finally, it sets a target of 40% renewable energy in electricity generation by 2030, as against 17% today. The fact is that wind and solar energy are intermittent sources, dependent on the sun and the wind so they must be backed up by an energy source that is storable and flexible, capable of taking over in the case of a drop in production. This is the great advantage of hydropower. But because large sites are already equipped, the potential of increasing hydropower production is limited. On the other hand, some facilities can be optimised. This is the case for Romanche-Gavet in Isère, where a huge project is underway (2010–2020) to replace five dams and six power stations with an underground facility and a single reservoir, with an electric power increase of 30%, to 92 MW.

(1) Washington State University estimates that dams release one gigaton of carbon dioxide per year, or 1.3% of all GHGs produced by human activities (BioScience, October 5, 2016). 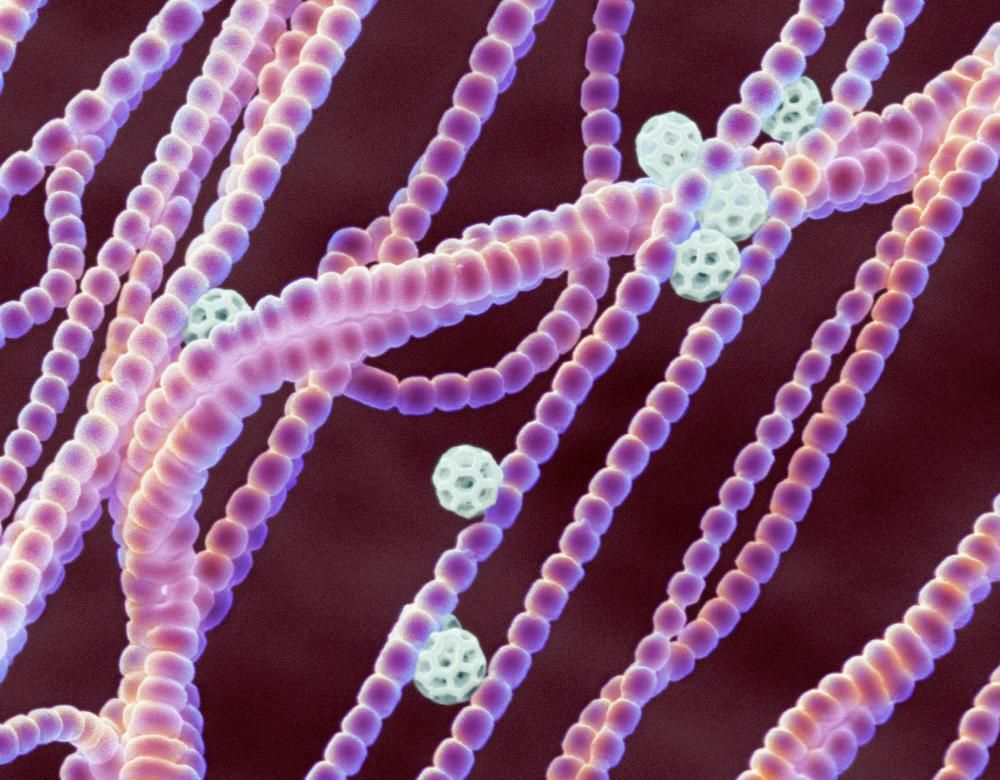 A lack of oxygen…

When temperatures rise in valleys and in mid-mountain areas, the concentration of nutrients (nitrogen or phosphorus) promotes the proliferation of seasonal algae or invasive species, with an ensuing depletion of oxygen in the water. The reservoirs of Grangent and Villerest on the Loire have been contaminated in this way by cyanobacteria bloom (photo). Oxygen depletion can also cause the release of methane, a greenhouse gas. On the other hand, as an article published in the journal Nature on 19 February 2019 notes, by containing floods, dams limit the methane emissions produced in naturally flooded lands.

Dams have indisputable effects on fauna and flora, notwithstanding efforts to limit these.

Like all uses of water, hydroelectricity disturbs aquatic fauna and flora and sediment circulation (1). ‘Amphihaline’ fish species – which migrate over long distances between the sea and fresh waterways – are particularly impacted because they have to make their way across a number of structures to reach their spawning grounds or get back to the sea. This is the case for eels, now considered to be in critical danger of extinction, as it is of salmon, protected since 1988 and which only survives in a few French rivers, and sturgeon – of which only a few thousand remain in the Gironde-Garonne-Dordogne basin. To be sure, hydraulic facilities are not alone responsible for the increased scarcity of species, which also results from overfishing and pollution (2). Nevertheless, several measures strive to reduce the negative impact of dams: the creation of ‘fish passages’ to facilitate travel for highly migratory species such as lamprey or salmon on the Loire or the Rhine; the introduction of species into lakes or the protection of native species; fish-friendly turbines that can reduce fish mortality; and even, when necessary, the transfer of fish by truck, as on the Garonne, for instance. In extreme cases, the partial destruction of a facility may be required. In what amounts to the largest planned dam destruction in Europe, this was the solution announced in 2009 and scheduled for 2019 for two dams on the Sélune river in the Manche; it is considered the only way to restore the natural habitat of eels, salmon and sea trout, along with the quality of the water (3).

Thousands of dams under construction

More than 3,700 dams are either planned or under construction in the world. There are two main reasons for this: the increase in energy demand and the existence of available capacity in developing countries, particularly in the Amazon, Mekong or Congo basins (photo: Inga II Dam). Hydropower accounts today for 17% of global electricity production, far behind fossil fuels (oil, coal, natural gas) with 65%, but ahead of nuclear power, at around 10%. In some 30 countries, including Brazil, Norway, Mozambique and Nepal, hydropower supplies more than 80% of electricity consumption. 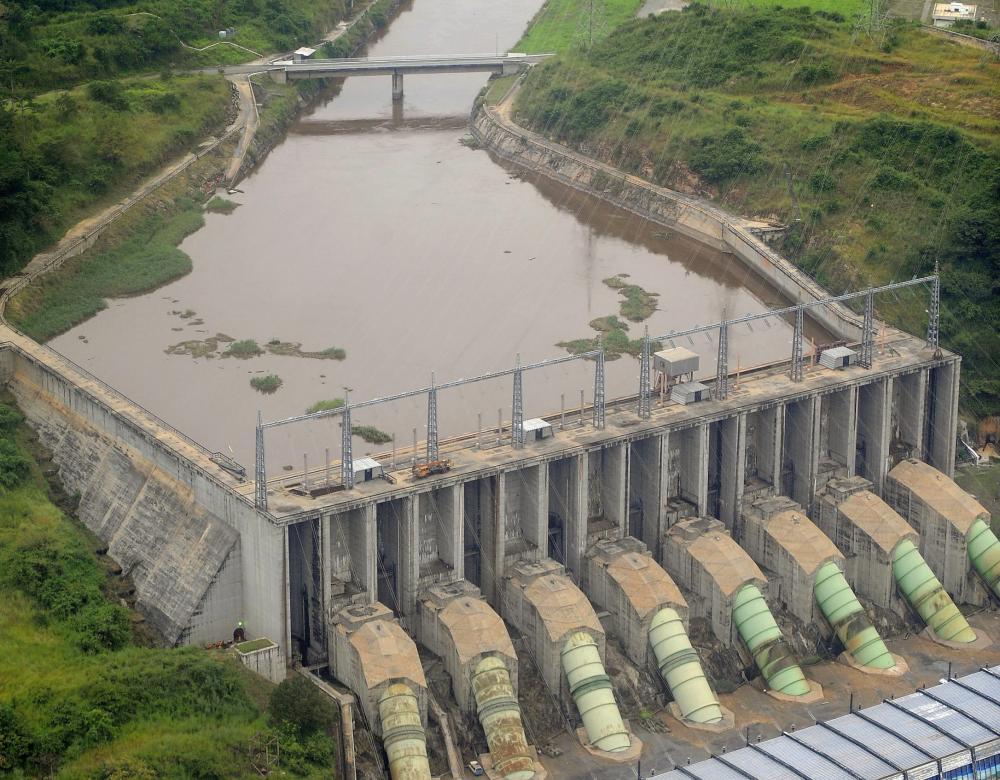 A crucial backup for intermittent energies

Thanks to its storage capacity, hydropower can cover periods of high demand and thus supplement intermittent energy sources.

In late afternoon or in winter, hydropower can serve to supplement the basic electricity supply, which is mainly nuclear in France. How? Pumped storage hydroelectricity (PSH) stations are equipped with two reservoirs: at off-peak hours, water is pumped from the lower reservoir to the upper reservoir whose water is released through turbines at peak hours. To a lesser extent, hydropower plants, in mid- mountain areas, can also modulate their production by shutting valves for dozens of hours, like canal locks. In total, this storage capacity represents an additional 14 gigawatt hours that can be made available in just a few minutes, which amounts to about 20% of the annual hydropower production. The ready availability is what allows it to be associated with such intermittent sources as solar or wind. A ‘virtual power plant’ called soFLEX’hy is being tested since 2018 in Provence-Alpes-Côte d’Azur, to adapt hydroelectricity production on the Durance to fluctuations in the supply from two photovoltaic farms. No new installation is required; simply coordination between existing facilities. In the future, this type of ‘virtual power plant’ could supply ‘100% green’ electricity. 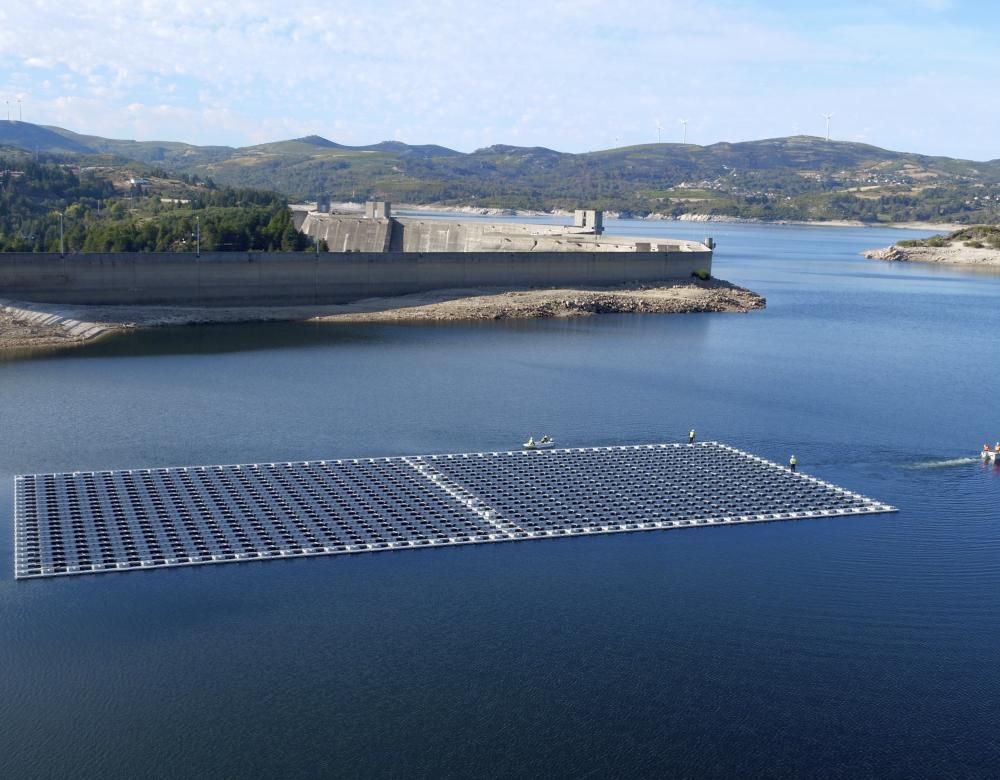 Solar panels on reservoirs in the future?

In addition to their role in energy storage, reservoirs could accommodate floating solar plants. This is the idea promoted by the Lille firm Ciel & Terre that built a first small power plant in Alto Rabagão, Portugal, on a hydroelectric dam, which has been in service since late 2016. Similar projects are under study in Brazil, in order to make optimal use of the reservoirs. The French utility company EDF is also studying the possibility of equipping some reservoirs with wind or solar plants.

The Laos dam break in July 2018 points to the risks of large infrastructures, both for humans and for the environment.

It is difficult to generalise the stakes in building new dams. In developed countries, large projects are no longer in fashion, and for good reason: in France, for example, 95% of the hydraulic potential is already exploited. But, according to International Energy Agency (IEA) statistics, nearly one billion people, or 13% of the world's population, still live without electricity. And it is in the developing world – in Brazil, Tanzania, Tajikistan, and Cambodia, for instance – that large projects are now being built. The Three Gorges Dam in central China, operational since 2009, has a record power of 18.2 gigawatts (GW): an order of magnitude comparable to the combined power of all hydraulic installations in France (25.5 GW). This dam provides a striking illustration of the impacts of major dam projects: the displacement of 1.4 million people; the destruction of a thousand towns and villages; disasters for the ecosystem, including the extinction of the Yangtze river dolphin; the lowering of the water level downstream, with its negative impact on farmers and on the drinking water supply, etc. A project this titanic is exceptional, to be sure; but other big projects, in the Amazon, in Africa, and in South Asia, raise similar concerns for the environment and local populations. Some of these are being developed by China Three Gorges Corporation, the world leader in hydropower, as is the case for the Inga III project (11 GW) in the Congo. The problem is that risks are not always sufficiently taken into account, as was demonstrated in the summer of 2018 in Laos when the dam under construction collapsed, engulfing seven villages and causing the death of dozens.

Since the collapse of the Malpasset Dam in the Var in 1959, which killed 423 people, safety standards have been reinforced. Dams larger than ten meters are subject to complete inspections every ten to fifteen years. In the past, this necessitated draining the reservoir, and the resulting sediment spills were problematic for the environment. Monitoring is now facilitated by new technology, such as aerial or underwater drones, capable of inspecting hard-to-access pipes or mapping sites down to the smallest details (alterations in the concrete, for example). 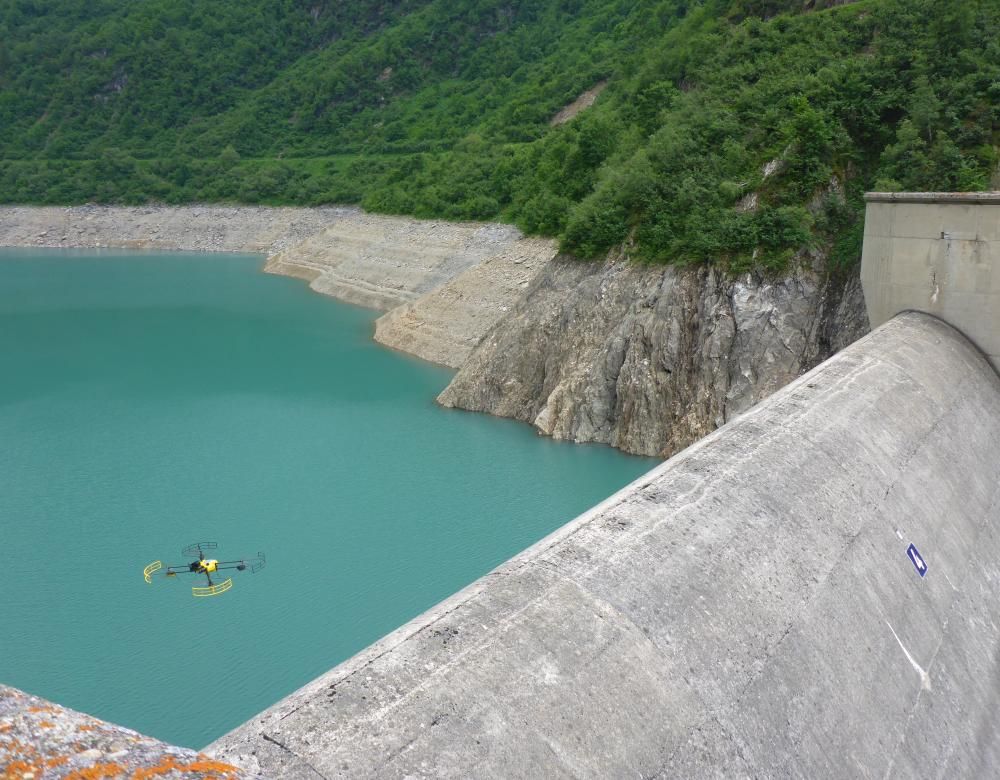 Climate change, by its effect on the rate and magnitude of rainfall, could complicate the work of hydropower producers.

Climate change can lead to more frequent droughts and higher average temperatures in France and elsewhere. Flow rates in the river will be modified at a result, with a consequent impact on water levels in the reservoirs and on hydroelectric production. Reservoirs may very well lose the capacity to satisfy all their users if the rules of water management and sharing are not modified. A case in point is Lake Serre-Ponçon, created by EDF’s dam in the Hautes-Alpes, which also serves as a leading tourist destination and to irrigate the plains downstream. If water intake decreases, both agricultural and recreational activities will be compromised (1). Experts strongly recommend taking climate change into account when designing new hydraulic facilities. This has not been the case until now, including for recent projects such as the large dams of Jirau and Santo Antonio built on the Amazon River in the 2010s, which are already suffering from lower than expected rainfall. The same is true of huge Belo Monte dam, also in Brazil, where a lack of water could cause production to fall to less than half of the installed capacity (2).

Electricity, but not only

Irrigation – not electricity generation – is the main reason for building dams: a quarter of the 59,000 dams listed by the International Commission on Large Dams (CIGB) are exclusively for irrigation. According to the CIGB, half the world’s dams are single-purpose and 17% of these are for hydropower. A growing number of dams, however, are multi-purpose: flood control, irrigation, electricity production, tourism, etc. In France, according to the Renewable Energies Syndicate (Ser), electricity sometimes represents only 25% to 50% of a dam’s value. 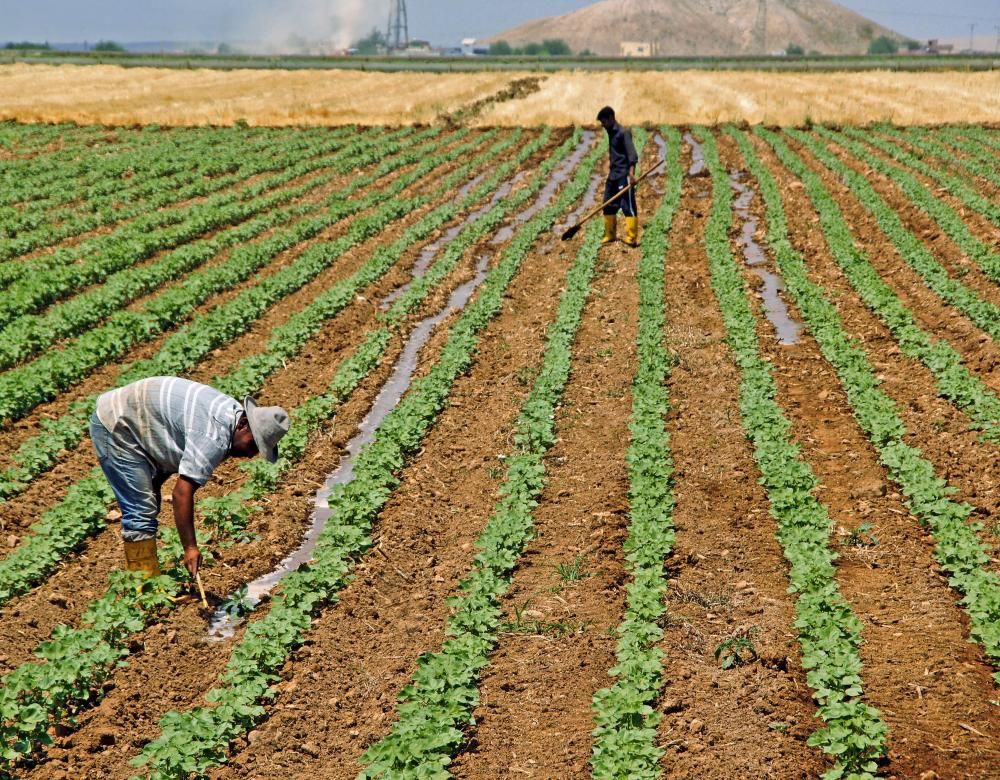 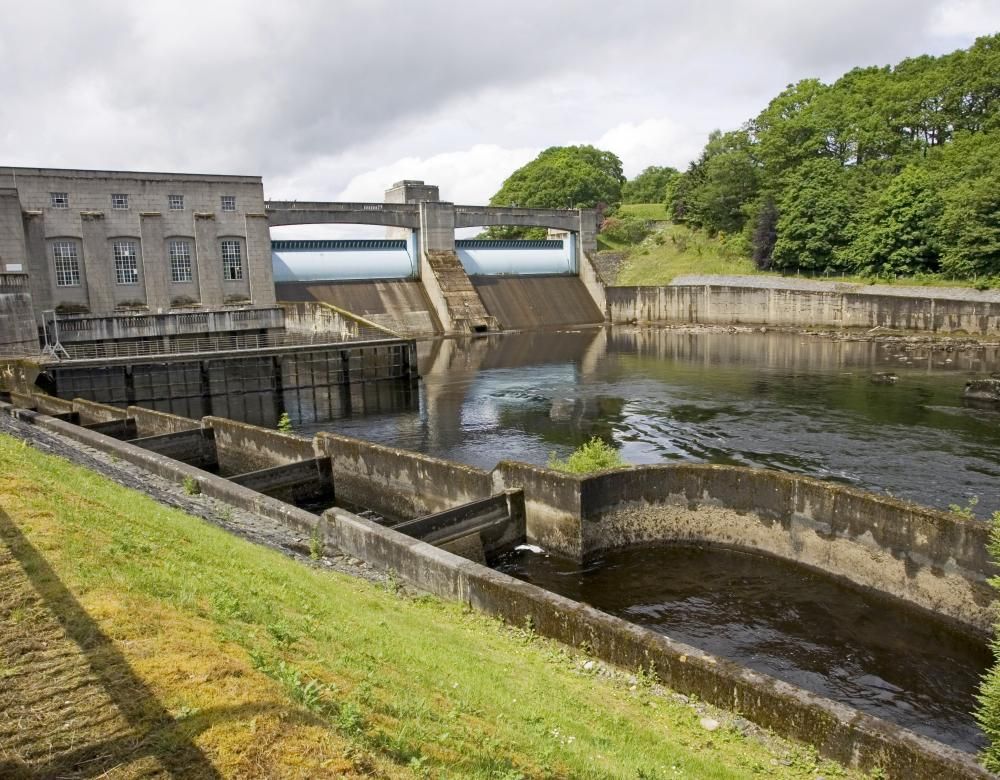 In France, three calls for tenders are scheduled by 2020 to renovate or build small hydropower plants. From the first call for tenders, fourteen projects (for a total power of 37 megawatts) were selected, including ten in the Auvergne-Rhône-Alpes region. Useful locally or in isolated locations, these new facilities play a modest role in terms of total installed capacity. In addition, their development is limited by high energy transport costs and environmental constraints, such as the ban on building new structures on a portion of waterways since the bill adopted on 30 December 2006.