Lightning has been shooting electric darts through terrestrial skies since the beginning of time. On Earth, it undoubtedly enabled humankind to tame fire. An attribute of the Greek god Zeus, it also inspired some of the greatest myths. Yet the violence of this meteorological phenomenon is such that we are still as always faced with the challenge of protecting ourselves from it. Furthermore, thunderstorms are far from having yielded all their secrets. Atmospheric physicists still do not fully understand the process of cloud electrification or the way in which a lightning discharge is triggered and then spreads. The aim of the European Exaedre project is to gain a better understanding of the different processes at work in storm clouds, since lightning is the culmination of a multitude of dynamic and electrical microphysical phenomena of great complexity. The results of the project, conducted in Corsica in October 2018, should contribute to improving real-time storm monitoring and weather forecasts. The first findings of the research are being analyzed. 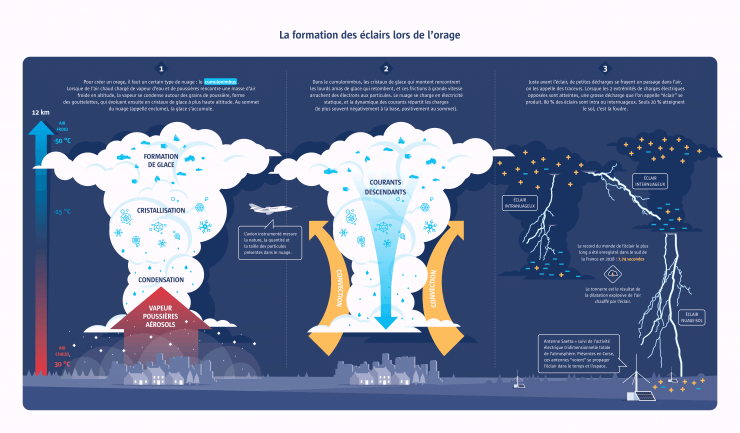 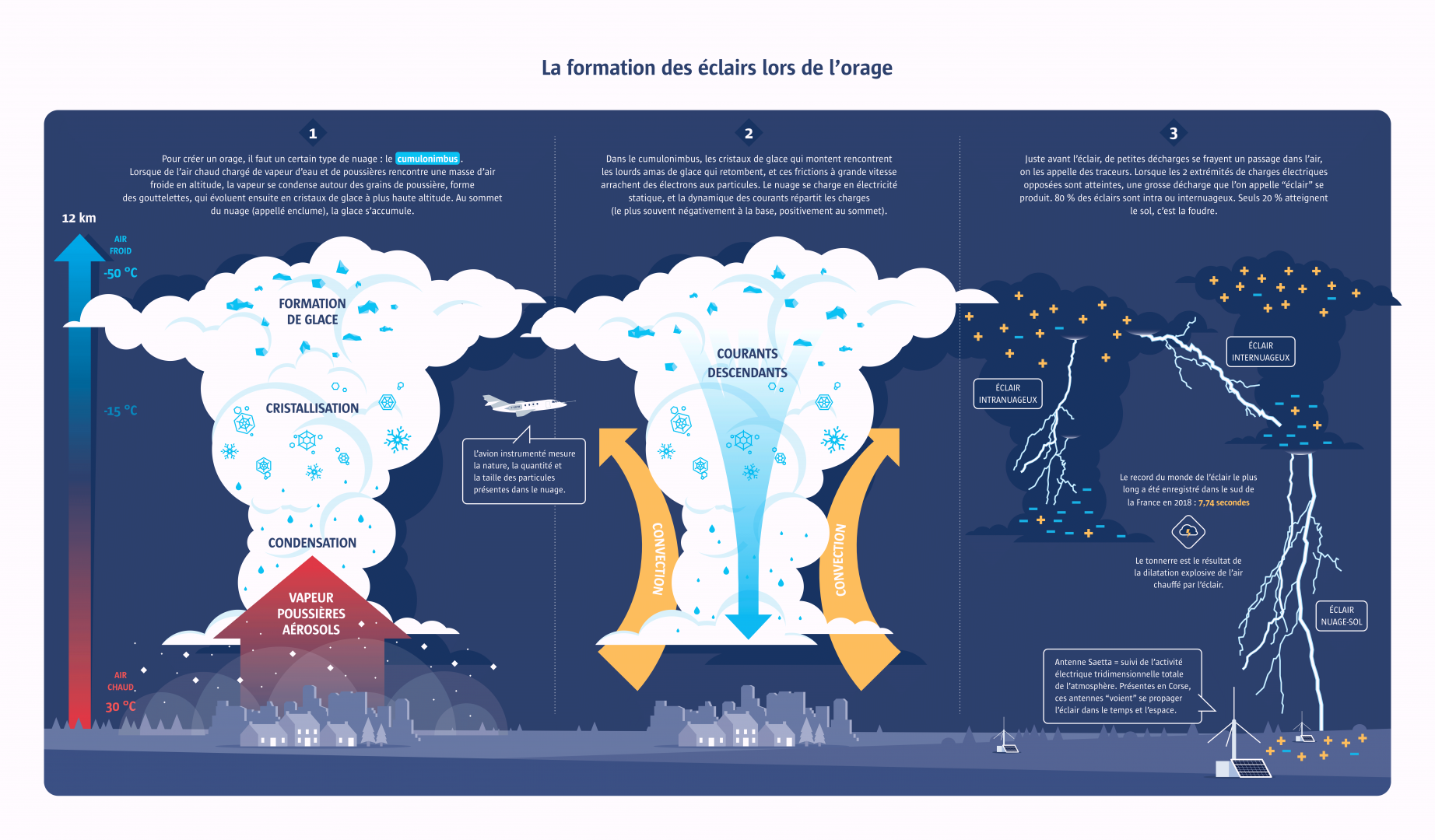 From commercial aircraft to flying laboratory

On the runway of the Ventiseri-Solenzara airbase, a hundred kilometres south of Bastia, a Dassault Falcon 20 aircraft of the Safire fleet (the French facility for airborne research) awaits take-off instructions. The team includes a dozen scientists and engineers led by Éric Defer, a CNRS researcher at the Aerology Laboratory in Toulouse. The scientists have attached sensors under the wings to capture images of droplets, crystals and aggregations of ice along the flight path. The goal: to create an extremely detailed “portrait” of the cloud’s composition. 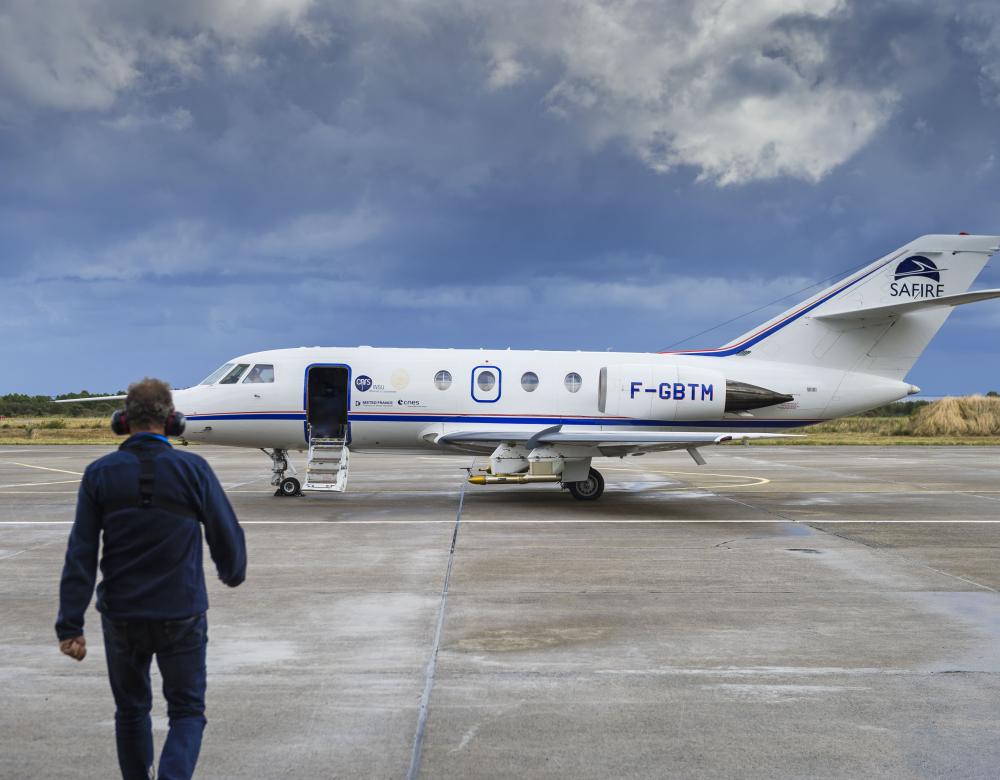 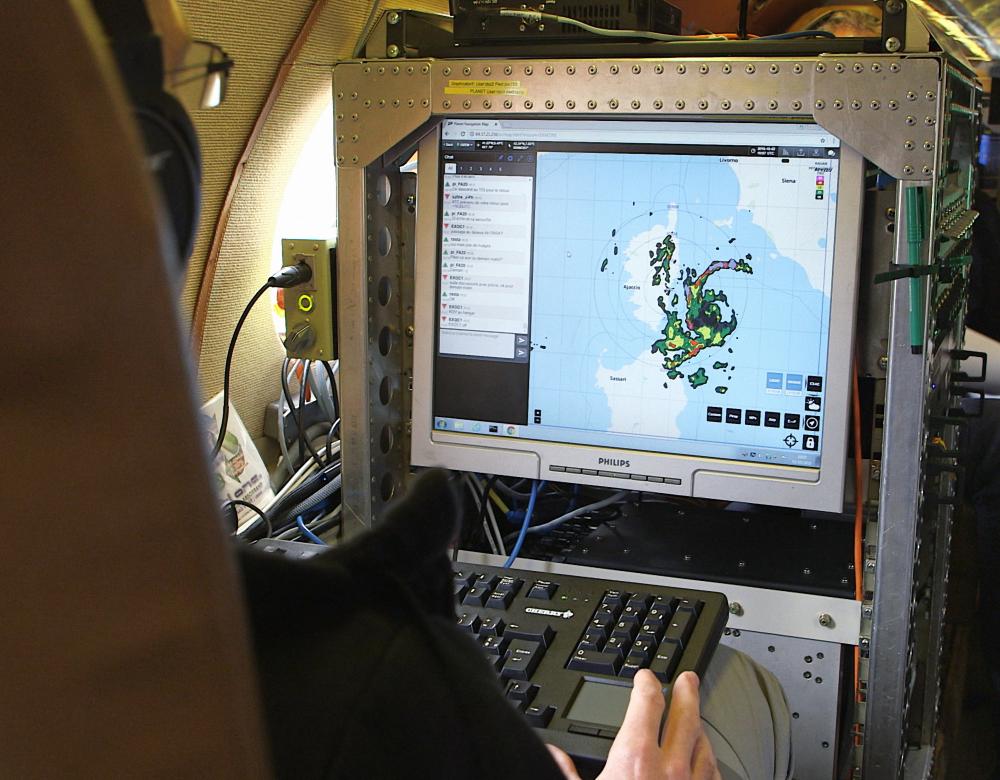 During the flight, pilots adapt the behaviour of the aircraft to the radar data used to monitor the storm’s development. They try to pass between lightning discharges so as not to endanger the scientific equipment, vulnerable in case of electrical overloads. The plane was struck once during the campaign, without damage to the crew or the equipment. Safety requirements are the same as those on commercial flights, but due to the very strong turbulence, these are stressful flights for the pilot and crew.

For the first time, a sensor-equipped aircraft penetrating into the heart of the cumulonimbus has enriched analyses made from the ground.

Severe thunderstorms could increase as a result of global warming. Verifying this hypothesis requires precise descriptions of storm-related phenomena. This is the aim of Exaedre (EXploiting new Atmospheric Electricity Data for Research and the Environment), a European project led jointly by CNRS, Cnes and Météo France. In October 2018, French scientists set out in search of thunderstorms in the Corsican sky. We followed them on mountain tops where the network of lightning observation stations are located and onboard the CNRS aircraft. Equipped with a variety of sensors to collect data on the composition and distribution of particles in storm clouds. Indeed, particles and their brutal collisions are what generate the static electricity of thunderstorms. The ideal flight plan involves heading toward the top of the cumulonimbus and then approaching the core of convection as the storm develops. Another scientific project, South American this time (Relampago - Cacti), also studies the processes at work in the cumulonimbus, but using drones that can only fly above the clouds, not inside them. It cannot therefore yield images of particles suspended in the cloud. During the Exaedre mission, 10,000 lightning discharges were measured during 15 thunderstorms. The average diameter of storm cells: 25 to 30 kilometres, compared to 1,000 kilometres for those measured by the South American Relampago campaign.

Electricity in the air

Physicists Sylvain Coquillat and Éric Defer verify one of the antennas of the SAETTA network of 3D lightning mapping array stations covering Corsica since 2014. At an altitude of 1,940 metres, in the heart of the highest mountain range in Corsica, Monte Cinto, this very high frequency source detection antenna can pick up lightning activity within a radius of 200 km. Comprised of 12 stations of this type, the Saetta network can map lightning discharges in 3D by detecting their electromagnetic radiation. 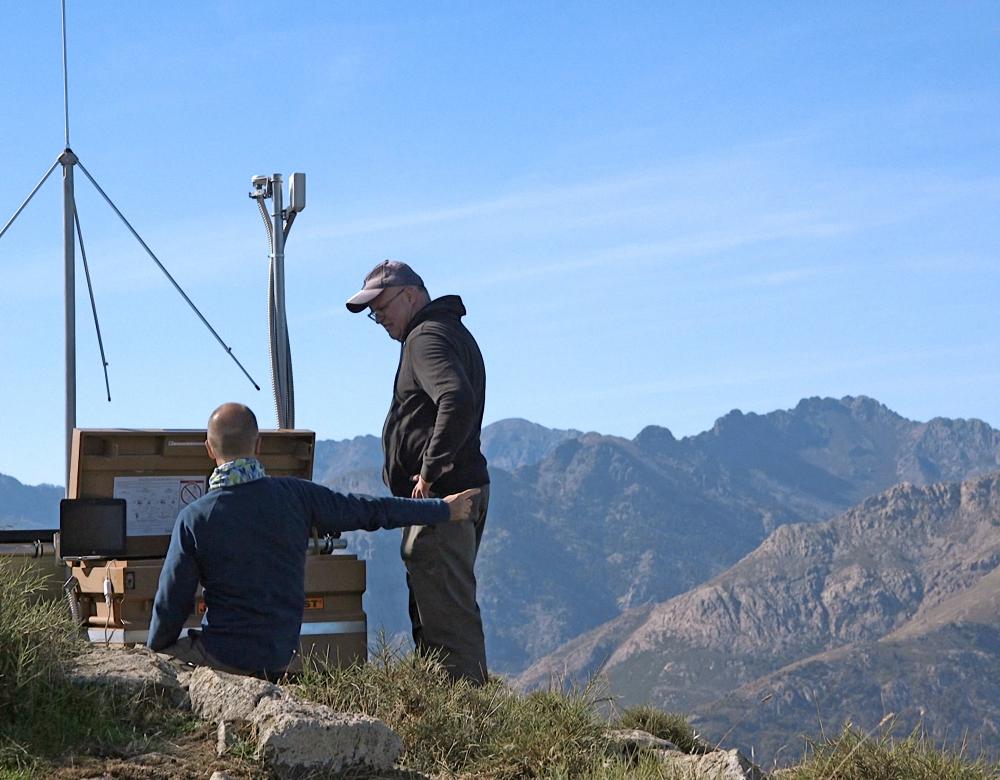 From cumulonimbus to lightning

At the core of a storm cloud, the lightning flash, which is called a lightning strike when it hits the ground, is the result of complex microphysical and electrical phenomena.

Thunderstorms are linked to the presence of a particular cloud type: the cumulonimbus. But how does electrical activity manifest itself? The cumulonimbus is a natural capacitor, whose electrostatic force essentially derives from the force of the oppositely charged currents traveling through it. The more intense the heat on the ground, the more powerful the upward convection motion and the greater the risk of thunderstorms. Air carrying water vapour and dust accumulates ice crystals as it rises in altitude. Aggregations of ice form at the anvil-like top of the cloud, more than 10 kilometres high. When they become too heavy, they fall and collide with rising droplets and crystals. Since these two opposing currents move at high speed, the friction causes electrons to be ripped off the suspended particles of dust, water and ice. As a result, the particles become electrically charged, in much the same way as a balloon rubbed against a synthetic fabric generates static electricity. But the cumulonimbus is a monster of millions of volts of potential energy! The dynamics at work in the storm cloud generally lead to an accumulation of negative charges at the bottom and positive charges at the top. Although air is an insulator, when the imbalance between charges reaches a certain point, the electricity opens a pathway through which the discharge occurs. It is estimated that most lightning happens inside the cloud or between two clouds. Only 20% of discharges reach the ground: these are the lightning strikes. 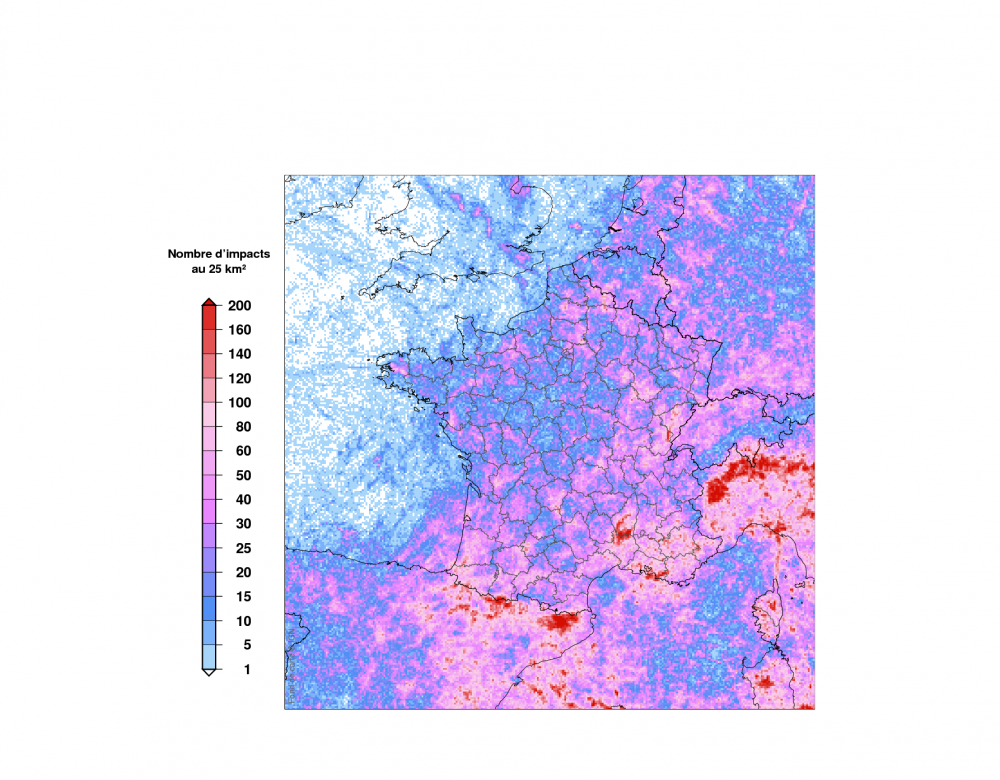 Lightning strikes cause an estimated 6,000 deaths per year in the world and 240,000 injuries, often with severe consequences.

Extremely powerful meteorological phenomenon, lightning sparks a great many fires throughout the world – more than 22,000 a year on average in the United States alone – and it is estimated to be responsible for about 6,000 deaths per year in the world and 240,000 injuries, leaving survivors with often permanent disabilities. Yet, contrary to popular belief, the vast majority of people struck by lightning survive. In France, according to Inserm, there are around 15 to 25 deaths by lightning per year and a hundred lightning-strike injuries. How and why do most people survive lightning strikes? A research centre in Toulouse, the Institut de Médecine Environnementale Kéraunique (“keraunós” means lightning in Greek and Roman mythology) has been set up to study this unexplored area of medicine. Lightning-caused injuries vary from the very benign to the extremely severe: from bruises or fractures to arrhythmia, neurological disorders or organ damage from the shock wave. Interestingly, a group of people hit by lightning will exhibit very different symptoms, for yet unknown reasons. Starting in October 2019, a research protocol will be used in France to monitor metal nanoparticles in survivors. The hypothesis is that people may more or less “attract” lightning, and that these metal nanoparticles, once they are altered by an electric current running through the body, can have a lasting impact on the organism. 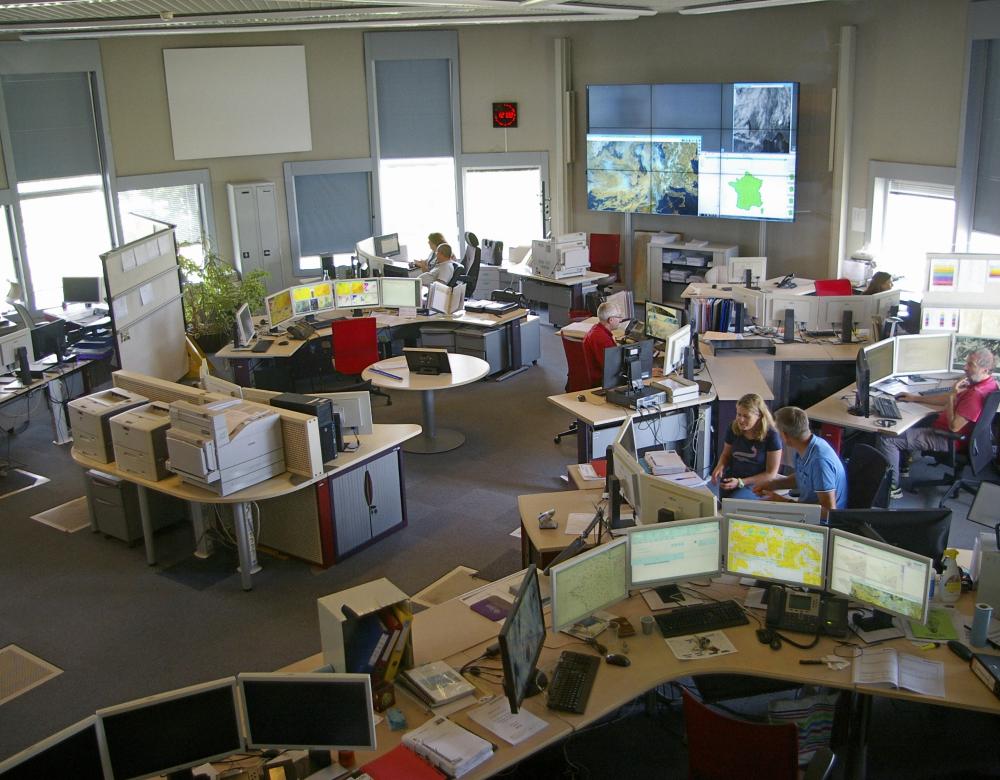 Storm forecasting is currently effective on the local level, but more precision and the capacity to target areas exposed to danger will require integrating the effects of topographic relief into the models. This is one of Météo France’s short-term goals. As for the integration of lightning flash data, which is the heart of the Exaedre project, this will necessitate new missions in the field, but also the development of a digital model to simulate the behaviour of a storm cloud (based on the “Meso-NH” model already used for atmospheric simulation).

A year after the Exaedre mission, the team is still far from having processed all the data collected in the eight flights of the flying laboratory.

Air and ground measurements conducted in Corsica have demonstrated that, as thunderstorms develop, hydrometeors (particles of water and ice) inside the cloud increase in number, and the lightning lasts longer and travels longer distances. This finding confirms the crucial role of suspended particles in storm processes. The team also observed that aggregations of ice (called graupels) are more numerous in the cloud’s core of convection and are clearly associated with the development of the electric field. Monitoring them should make it possible to improve severe thunderstorms and lightning forecasts. But a sensor-equipped aircraft cannot be flown during every storm! Remote instruments of observation (satellites, ground radars, etc.) will have to be developed, as will algorithms (even artificial intelligence) capable of processing new data. In the meantime, the information collected on the graupels during the Exaedre mission is already being integrated into Metéo France weather models. In the longer term, scientists hope to be able to simulate thunderstorms by integrating data (on the size and concentration of these aggregations, for example) monitored in real time. This should improve the coordination of severe storm-related warnings and preventive measures.

In Mexico, a record hail storm

Thunderstorms often cause damage. Violent downpours or hail can ravage entire harvests and put a great strain on infrastructures. On July 1, 2019, an extremely intense hail storm surprised residents of several cities in northern Mexico. Previous days had seen temperatures reach 31°C. Hail is not uncommon at that time of year, but this hail storm unloaded so much of it that an unprecedented two meters of ice accumulated on the ground. The cities of Guadalajara and Tlaquepaque reported 200 homes and businesses hit and at least 50 vehicles washed away by the torrent formed by the ice. 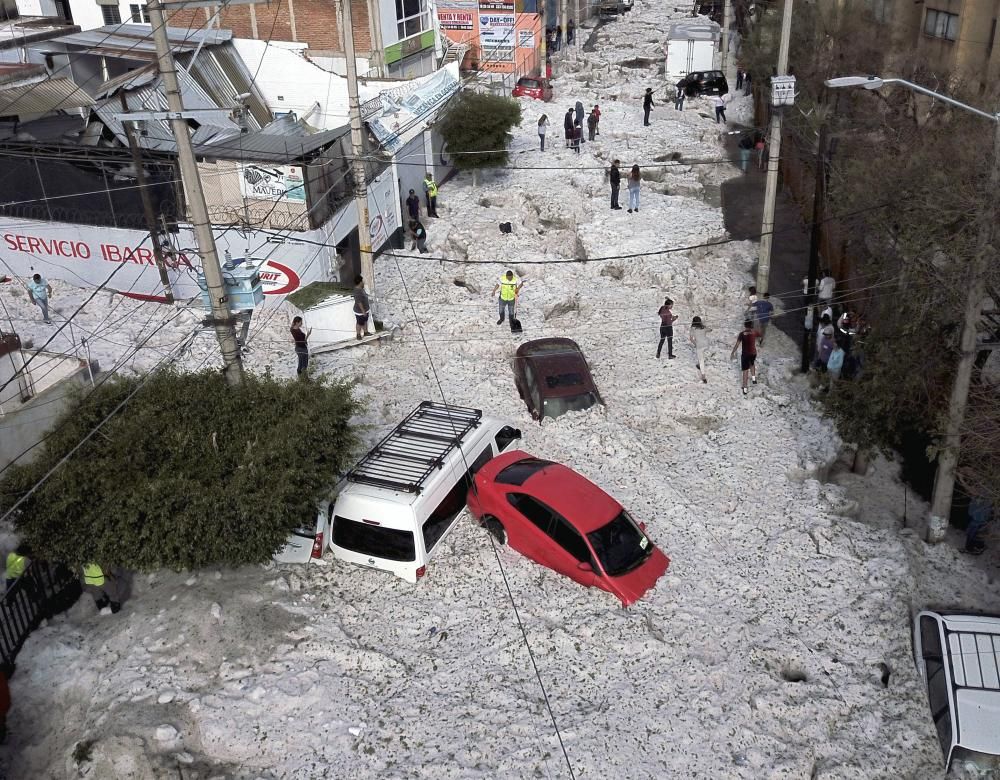 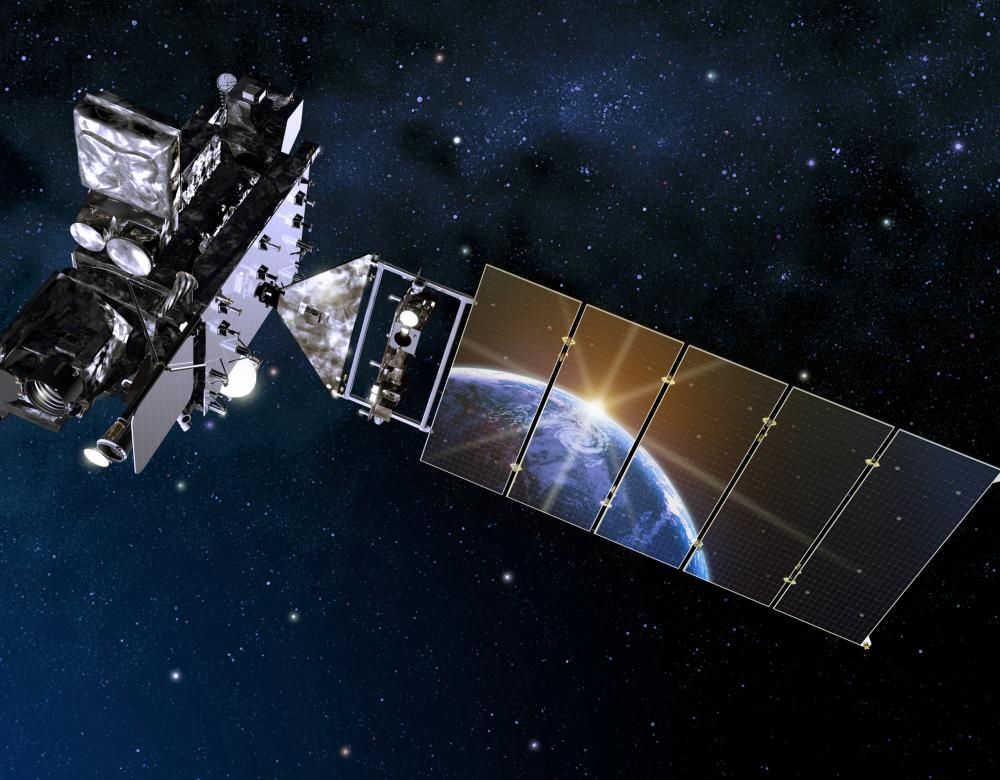 Perfecting the tools used for remote lightning sensing from space is crucial. In addition to all the world satellites already capable of monitoring atmospheric electrical activity, Nasa deployed GOES-R (above) in 2016 to study regions for which there was relatively little storm data (South America). And in 2021 the European Space Agency is scheduled to install a new powerful lightning detector on its next generation Meteosat satellite.