For five months, between May and September 2018, Mayotte was hit by dozens of earthquakes, causing damage and worrying residents. Although such “earthquake swarm” phenomena have been observed elsewhere in the world, this one surprised and baffled scientists from the start because of its duration and its occurrence in a low seismic zone. It took several months of research to identify the cause: the onset of a powerful volcanic eruption. The eruption is the largest of the effusive type (i.e., characterized by the emission of fluid lava) recorded in the world for more than two centuries. And it is the first volcano whose birth was observed almost as it was happening in the underwater environment!

A strange seismic phenomenon in Mayotte

The island of Mayotte is in an archipelago reputed to be a low seismic zone. 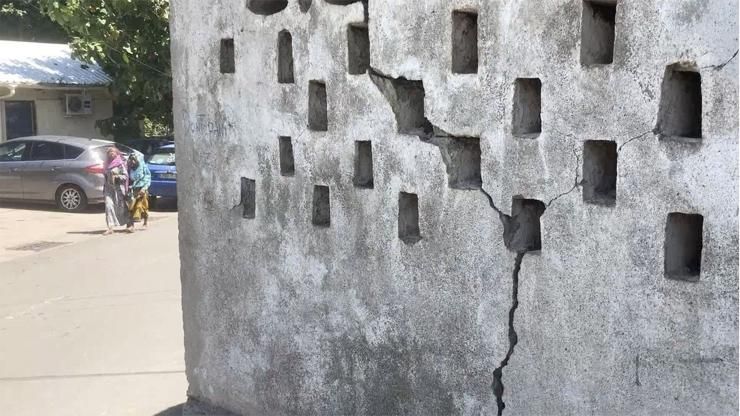 Since May 2018, Mayotte has been hit by more than 2,000 earthquakes. Thirty-five of these were of a magnitude greater than 5 and therefore widely felt by a population that has all the more reason to be surprised as the region is classified a low seismic zone. And yet suddenly cracks were happening on the walls of houses, public buildings and schools. To be safe, some residents have even taken to sleeping under the stars! Even though the volcano remains active, the number of earthquakes has decreased since 2019 © M. Alonso/E. Sanchez/AFPTV/AFP 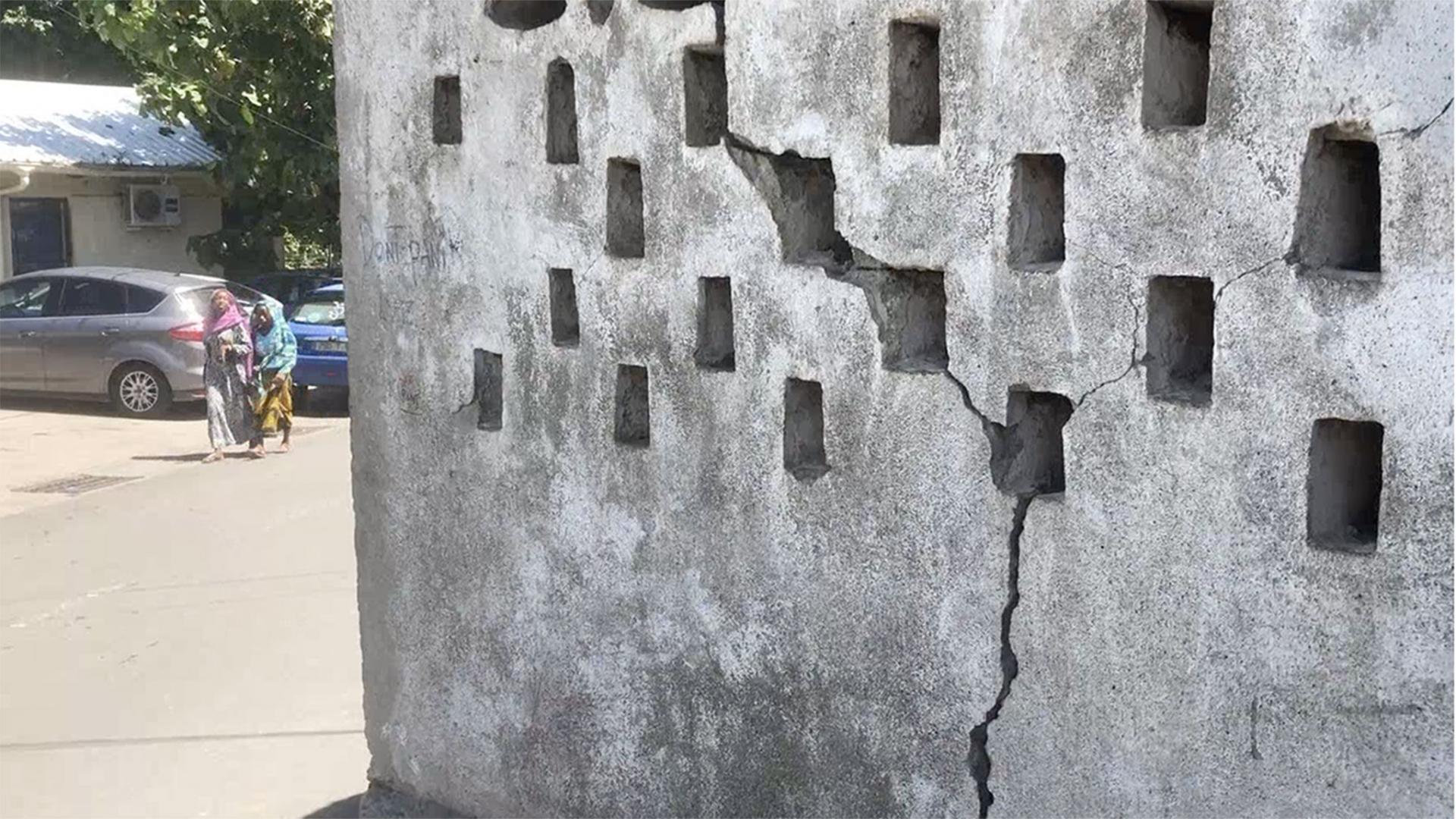 Since May 2018, Mayotte has been hit by more than 2,000 earthquakes. Thirty-five of these were of a magnitude greater than 5 and therefore widely felt by a population that has all the more reason to be surprised as the region is classified a low seismic zone. And yet suddenly cracks were happening on the walls of houses, public buildings and schools. To be safe, some residents have even taken to sleeping under the stars! Even though the volcano remains active, the number of earthquakes has decreased since 2019 © M. Alonso/E. Sanchez/AFPTV/AFP

Yet in the spring of 2018 dozens of earthquakes were felt there. On May 15, 2018, at 6:48 p.m., an earthquake of a magnitude of 5.8 on the Richter scale triggered panic among the inhabitants of Mayotte, three of whom were slightly injured. Fears were all the greater in that this seismic event of unprecedented intensity in this region was not an isolated incident. There had been as many as several dozen tremors per day in the archipelago since May 10. The sequence continued for days, weeks, months… What was happening? The mystery only deepened as scientists discovered other phenomena. In July, a team working on recordings from six GPS stations deployed in the region found that the archipelago was drifting eastward and sinking into the water. By June 2021, the displacement measured 21 to 25 centimetres, depending on the location, and the subsiding measured 10 to 19 cm! Then, in November 2018, researchers announced that seismograms located thousands of kilometres from the Indian Ocean had picked up unusual signals: a long-lasting low frequency rumbling, a type of vibration often associated with the flow of lava in volcanic conduits. Could a volcano be at the origin of the earthquake swarms, the strongest of which radiated from an epicentre in the open sea some 50 kilometres east of Petite Terre? And what would explain the other earthquakes, with epicentres closer to the coast? The Tellus Mayotte programme, urgently created and coordinated by the CNRS, had scientists looking at the bottom of the sea for answers to these questions.

The rush to deploy instruments

As the Comoros archipelago where Mayotte is located is a low seismic zone, at the time of the first tremors in May 2018, only two institutes, the Bureau de Recherches Géologiques et Minières (BRGM) and the Institut de l’Information Géographique (IGN), had seismic and GPS stations there. Scientists of the newly established Tellus Mayotte programme hurried to deploy a panoply of instruments on the archipelago, at sea and – during an operation organised by the army – on the remote, uninhabited island of Grande Glorieuse. From February to March 2019, seismic stations, satellite positioning systems, ground geophysics, and seismometers were installed on the seabed. 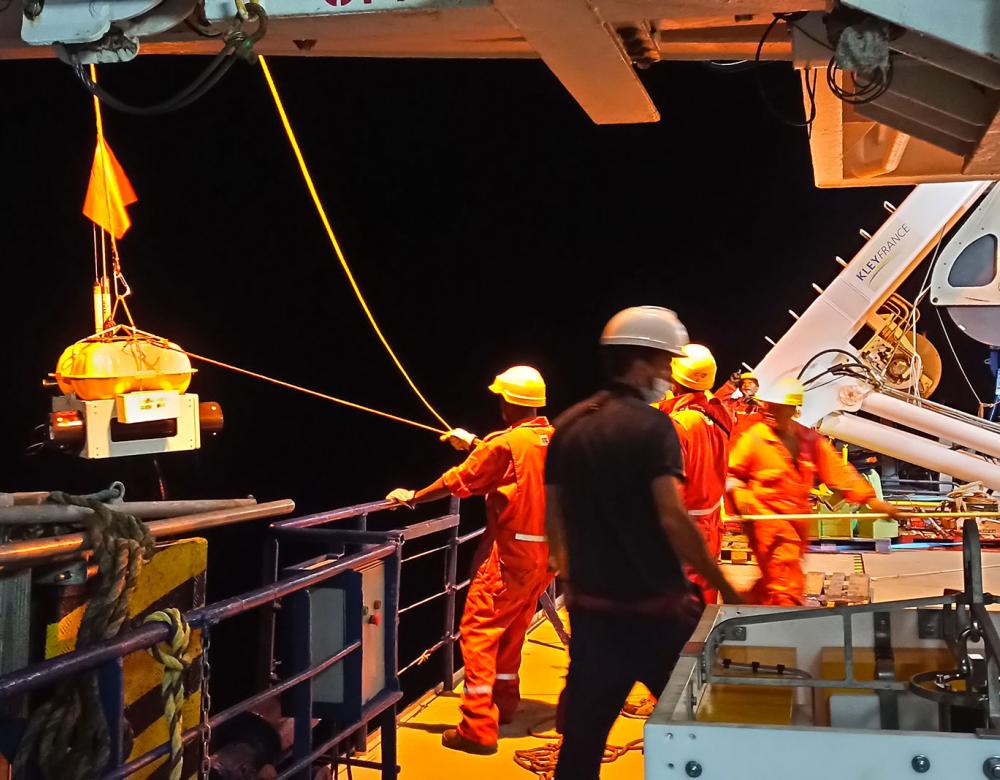 It was May 18, 2019, and a day of satisfaction on board the Marion Dufresne. After a 16-day campaign on the oceanographic vessel, the team of scientists from the Tellus Mayotte program had found an explanation for the nearly continuous succession of earthquakes that were rattling the archipelago. The culprit? An underwater eruption, and what made it all the more extraordinary, was that it was the first volcano whose formation was witnessed live and one of the largest ever detected in the world. Imagine: about 50 kilometres east of Mayotte, at the very tip of a system of ridges composed of small, ancient volcanic structures, scientists had discovered an unknown volcano at a depth of 3,500 metres. At the time of its discovery, a 2,000-metre high plume of fluids and particles was still escaping from it. 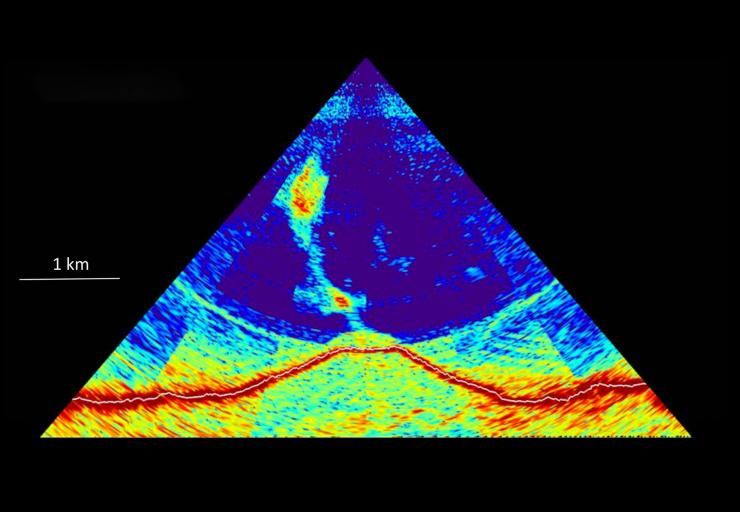 Organised in June 2019, only a month after the discovery of the volcano, ‘Mayobs 2’ detected a new lava flow, 75 meters high, south of the main cone. Formed in four weeks, its volume could cover a city the size of Paris (105 km2) with two metres of molten rock. Since then, new bathymetric surveys have revealed changes in the morphology of the seafloor. The fourth French volcano is indeed active! In 2020 however, it spitted 10 times less lava than during its first active year © Mayobs/IPGP/CNRS/Ifremer/BRGM 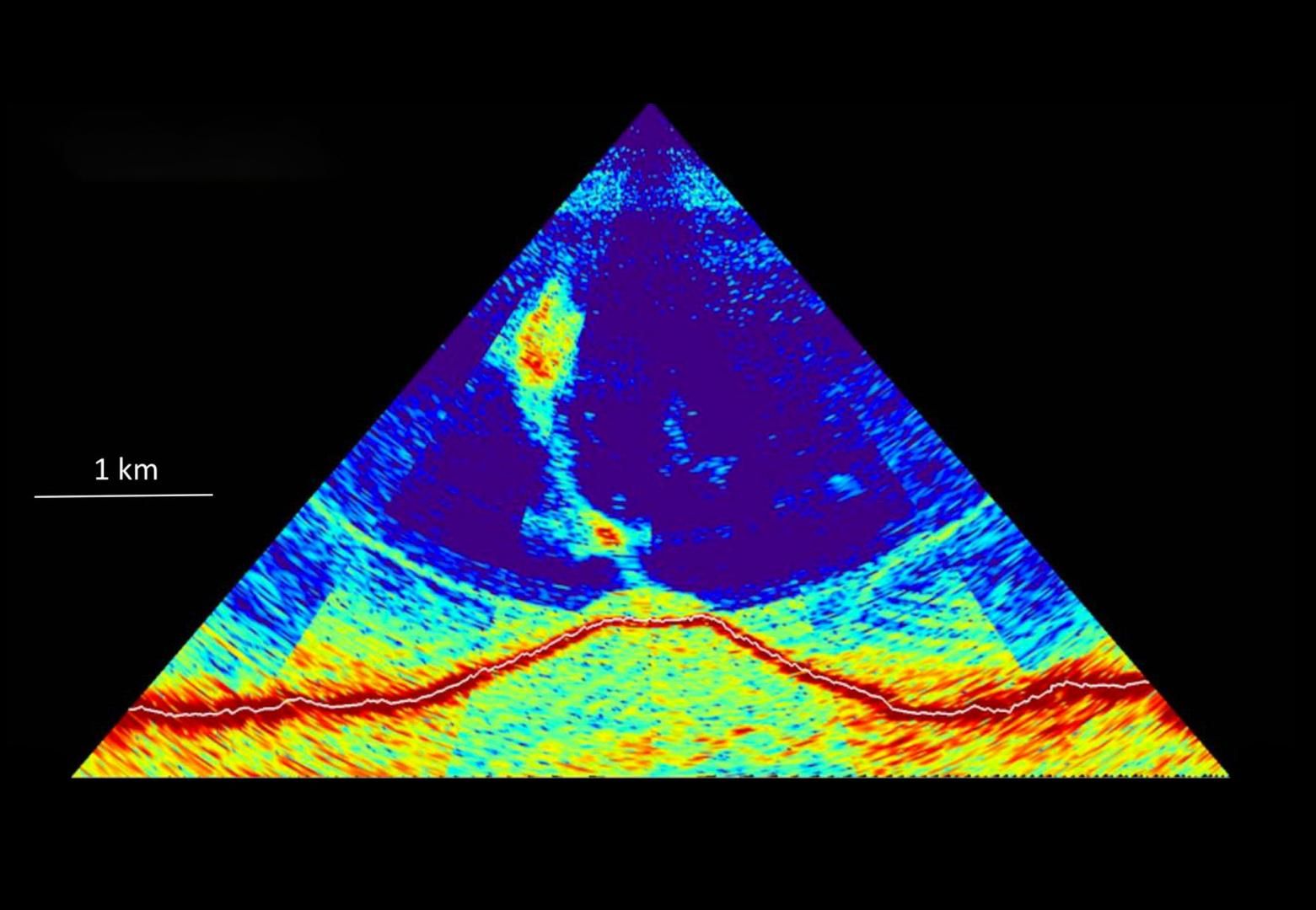 Organised in June 2019, only a month after the discovery of the volcano, ‘Mayobs 2’ detected a new lava flow, 75 meters high, south of the main cone. Formed in four weeks, its volume could cover a city the size of Paris (105 km2) with two metres of molten rock. Since then, new bathymetric surveys have revealed changes in the morphology of the seafloor. The fourth French volcano is indeed active! In 2020 however, it spitted 10 times less lava than during its first active year © Mayobs/IPGP/CNRS/Ifremer/BRGM

This volcano, 820 metres high and 4 to 5 kilometres wide, did not appear on the previous bathymetric surveys—i.e. measurements by echo sounding of water depths—conducted in 2014. Which meant that it emerged in just six to eight months. The 2019 and 2020 campaigns have confirmed the strong activity, as new flows have been observed each time. These observations have convinced scientists of the extent of the phenomenon. With an estimated magma production of 6.55 km3 in 900 days, this effusive eruption is the world’s largest in terms of volume since the 1783-1784 Laki eruption in Iceland (12.3 km3 of magma in 243 days), 237 years ago! 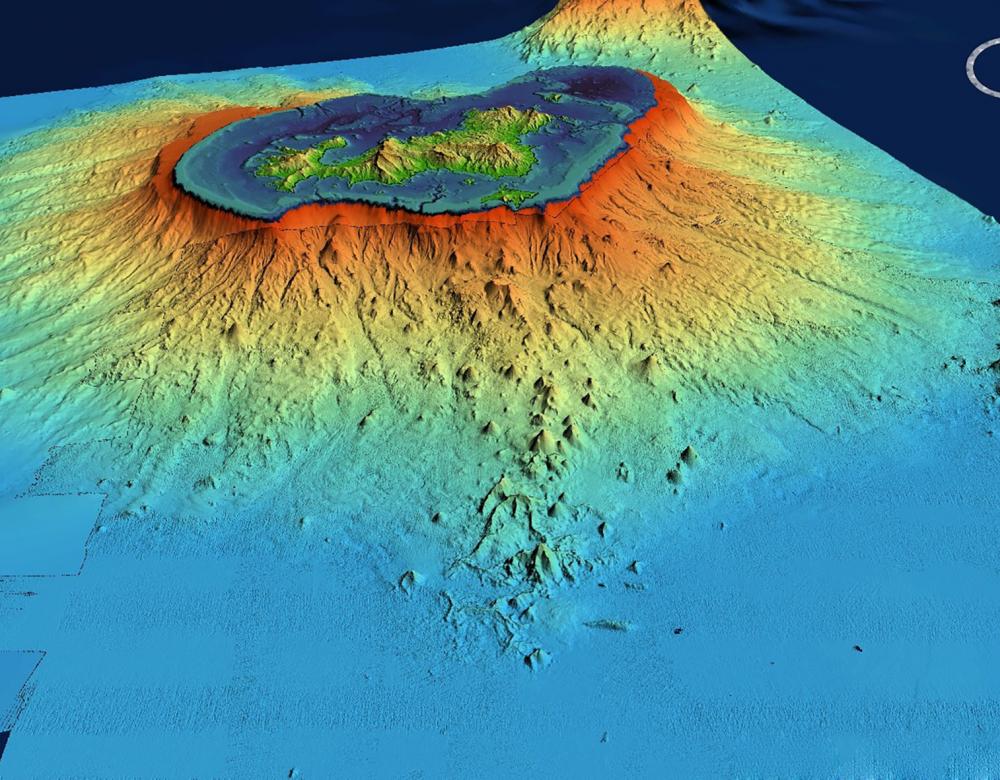 A ridge of ancient volcanos

Other surprises came with the discovery of the volcano. It turned out that the new volcano is located at the end of a ridge made up of small ancient volcanos, now inactive. This indicates that the region was the site of eruptions some 7,000 years ago, which is recent on a geological scale. In addition, the seismic swarms are moving. No longer where they were initially in June 2018 around the volcanic cone, they have shifted closer to the coast. In a structure evoking a caldera, the Marion Dufresne detects plumes of fluid and magma flows of recent appearance. This confirms the existence of a still active ridge.

The existence of a huge subterranean reservoir could explain the multiple phenomena observed in Mayotte.

The presence of a ridge of small inactive volcanos; seismic swarms moving from the active cone to two zones located 25 and 5 km from the coast; the displacement and subsidence of the archipelago; fluid plumes detected at sea and gas emanations on land… By May 2019, when the first oceanographic campaign came to an end, scientists found themselves with a puzzle, the pieces of which they had difficulty putting together. How could these various observations be reconciled? One hypothesis inferred the existence of a magma chamber between the archipelago and the swarm closest to the coast. This subterranean reservoir would supply magma to the volcano located 50 km away. As it empties, it would collapse little by little, displacing the archipelago eastward like a deflating tire. The lava working its way through the rocks at a depth of 25 or 50 km would be at the origin of the measured seismic activity. And fluid emissions composed of magmatic gases would travel through the subsurface to generate the plumes detected close to the coast. But this hypothesis would need to be confirmed. Scientists do not know the size and location of the magma chamber, which could be a network interconnected compartments rather than a single chamber. Without more information, it is impossible for them to estimate the duration of the eruption. One thing is certain: it is gigantic. At its peak, the Mayotte volcano produced about 300 m3 of lava per second. That’s thirty times more than the Piton de la Fournaise!

Multiple campaign on land and at sea

The hypothesis of a giant magma chamber needs to be validated in the field. On land, BRGM’s campaigns aim to measure anomalies in the Earth’s magnetic field and the propagation velocities of seismic waves, thereby learning more about the characteristics of the subsurface. At sea, CNRS, Ifremer and BRGM have chartered vessels on fifteen occasions to recover and replace instruments or to monitor the progress of the eruption.There were around twenty observation missions since Spring 2019. In June 2021, the floor was photographed for the first time, thanks to the submersible Victor 6000. 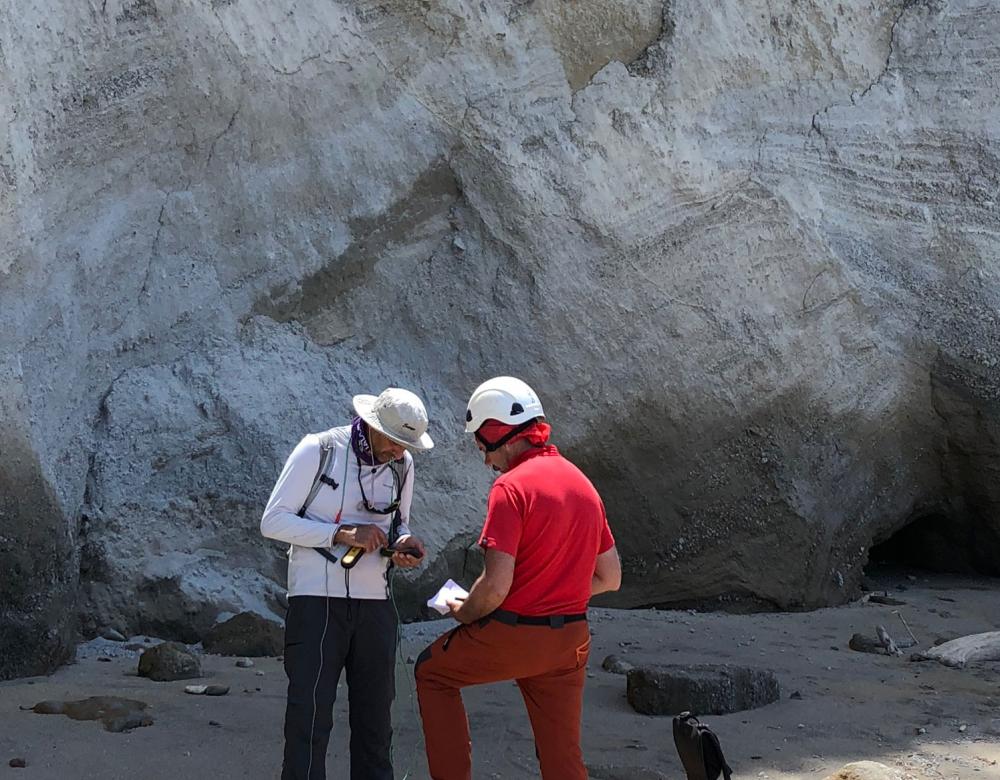 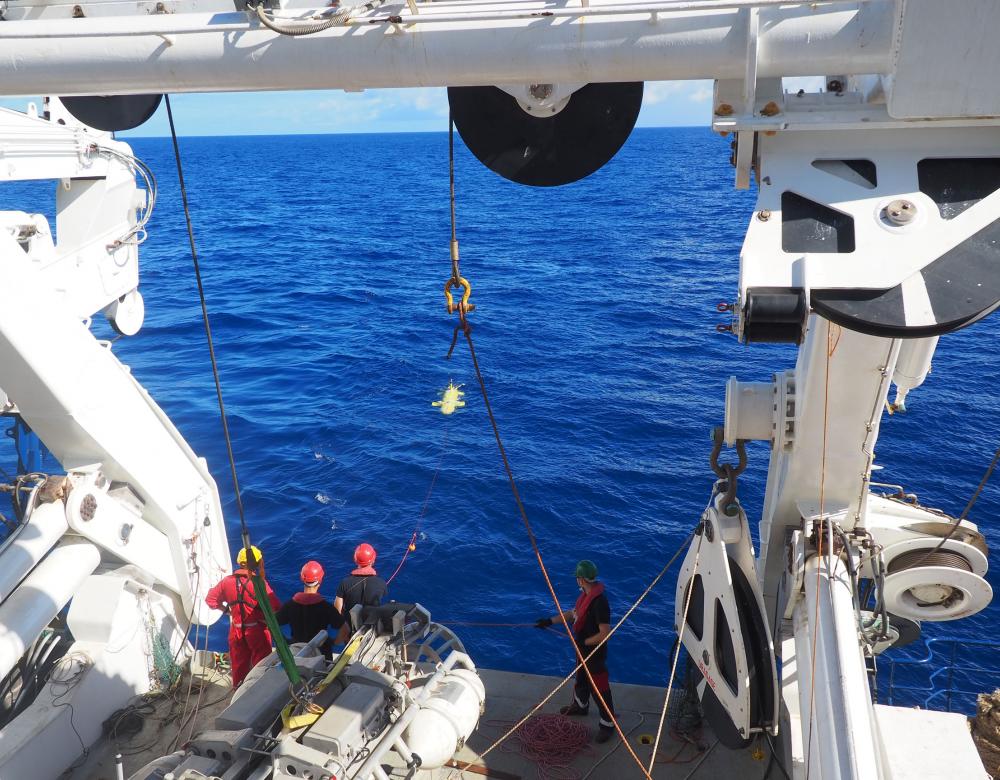 Toward remote monitoring of volcanic activity?

The underwater eruption that is going on now will be monitored for years to come. But, over the long term, systematic recourse to ships is not the best solution. Costs, logistical constraints, dependence on vessel availability are among the factors that make such campaigns quite complicated. The Marmor project, proposed by the Revosima scientists aims to create a cable network connecting the main instruments deployed at sea to the archipelago. This operation – the first of its kind – would allow researchers to monitor the activity of the volcano remotely.

Is there a tsunami risk?

Located about 50 kilometres from the coast and at a depth of 3,500 metres, the new volcano seems unlikely to present a danger to the population of Mayotte. But the current eruption is accompanied by other phenomena. If the seismic swarms closest to the coast were to rise to the surface, this could cause damage and even destabilize the submarine landslips by generating a devastating wave. In addition, the lagoon around Mayotte, which offers protection against waves from the open sea, may not suffice if very high waves were to reach the reef or the channels. Finally, the very small distance between potential tsunami sources and the coast make advance warnings difficult. 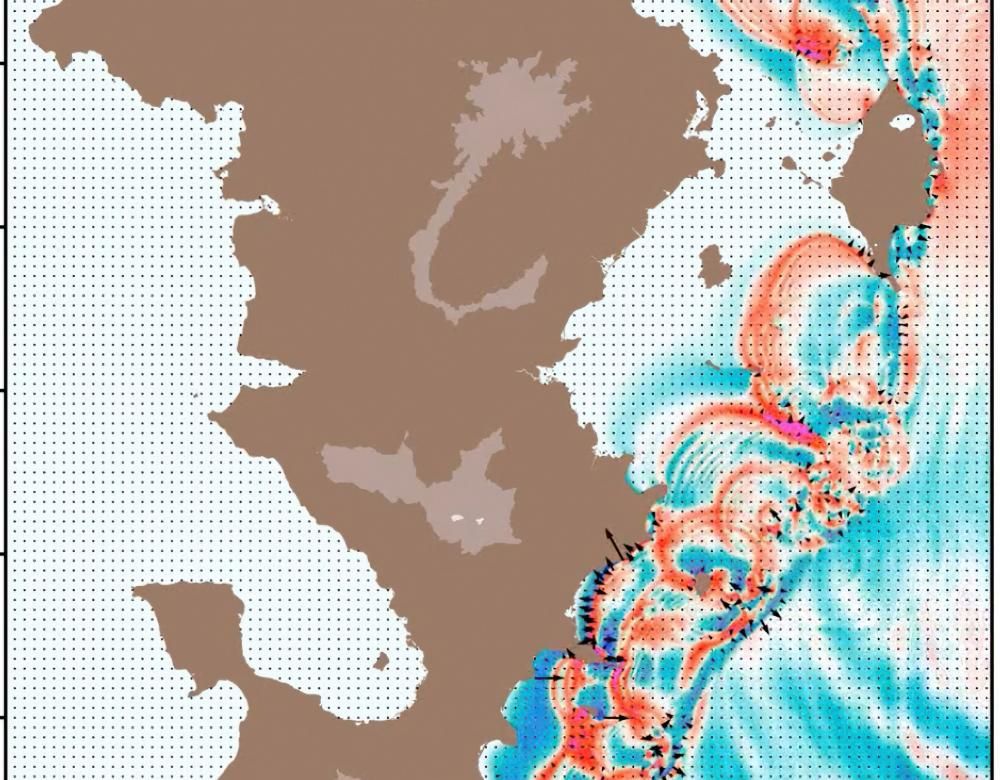 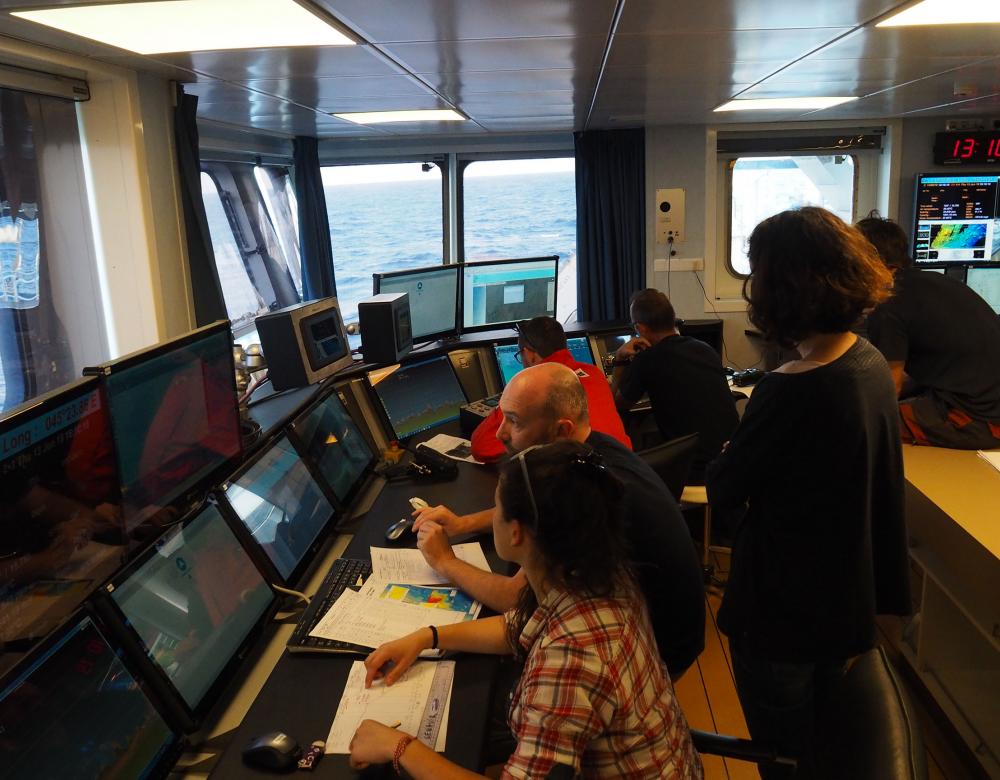 To monitor the situation, in June 2019, the public authorities decided to finance the creation of a permanent network: the Revosima observatory. A unit of the Institut de Physique du Globe de Paris (Paris Institute of Earth Physics), which operates from the Piton de la Fournaise observatory with support from BRGM and IFREMER, the French Institute for Exploitation of the Sea, it observatory brings together scientists from many research and teaching institutions.* Operational 24/7, it conducts oceanographic and ground campaigns, deploys measuring instruments, analyses data, etc.

Living with the new volcano

The inhabitants of Mayotte must learn to live with their new volcano. The government launched several initiatives, including regular briefings and interventions in schools, to prepare the population for possible risks. The goal is to educate the general public about what to do in the event of an earthquake, conduct evacuation drills, and identify the areas that could be most impacted. Twenty-four tsunami warning sirens are to be deployed in the territory by July 2021. On October 27, 2020, the first of these was inaugurated in the commune of Dembeni. 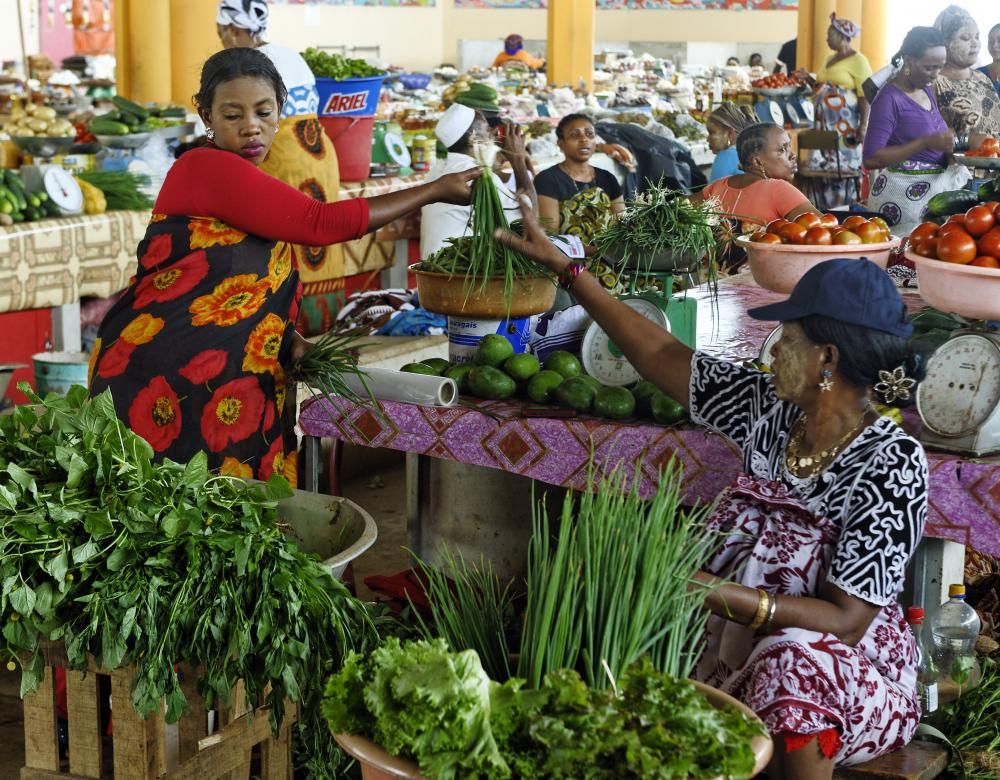