A composition of the painter Wols and a Drosophila fly head seem to observe us. This relationship to another, fear or empathy, told by the biologist Jean Claude Ameisen.

An episode of the series "correspondence(s)". 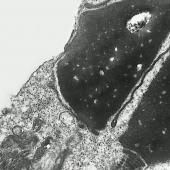 We are being observed by an other. An elusive inner life, emotions, intentions, we imagine behind the lines. What lies behind these strokes… Here, a composition by the painter Wols : a human face? an elephant head?… Here, a Drosophila head, the miniscule fruit fly, appears to examine us.

Fear or empathy... Today neuroscience reveals some of the mechanisms that allow us to experience in ourselves that which we perceive in others.

The word empathy was forged a century ago by an American psychologist to translate the German Einfülhung – literally sense inside, feel. The term was used by an art critic to describe our tendency to project onto an artistic work the emotions that we feel in contemplation of the piece. Empathy... We push towards an encounter with an other, even before knowing if we are mistaken. Is it not preferable to enliven for a moment the world that surrounds us, rather than to risk disregarding a presence?