Africa has chosen a way of preserving and sharing its history, culture, customs and knowledge that is different from books. It is orality, or words passed on from woman to woman, man to man, or male to female storyteller. It includes the iconic figure of the griot, which is a role assigned to a line of musicians, praise singers or historians. Oral heritage was looked down upon during the colonial period, but it does not belong to an outdated Africa. In the savannahs, 4G masts may be replacing ‘palaver trees’, but digital technology has not spelt the end for traditional orality. The latter remains alive. Practised in its inherited but also novel forms and given a new lease of life by social networks or dedicated applications, it has established itself as an object of science in its own right.

Communication technology and globalisation have led to the emergence of ‘neo-oralities’, which give Africa’s oral tradition a new lease of life.

The griot, who is both a storyteller and musician, stands under a palaver tree, surrounded by a circle of attentive listeners. That is the image of African orality in Western imagination. Like many stereotypes, it is not completely false. Oral tradition was indeed a ritual, where participants interacted, as in the case of the griot. In short, it was a social practice, a process through which the continent’s languages, cultural identity and values were passed on for a long time. That intangible and vast cultural heritage was vital at that time. But during the colonial period and afterwards, orality was looked down upon as a folk custom, or as a remnant of the past. Even so, at least its practice and repertoire were able to survive. However, with new communication technologies and globalisation, fresh opportunities to disseminate cultural heritage and open up to other cultures have emerged. Traditional orality turned out to be overtaken by neo-oralities. On the one hand, the stories told in the past can now be recorded, studied and archived. Conservation and digital distribution have taken over from direct orality, and they also help to preserve it. On the other hand, new forms of expression have appeared, the most iconic of which is slam. That form of non-traditional orality, which is also based on old tales, is more suited to dissemination than transmission. 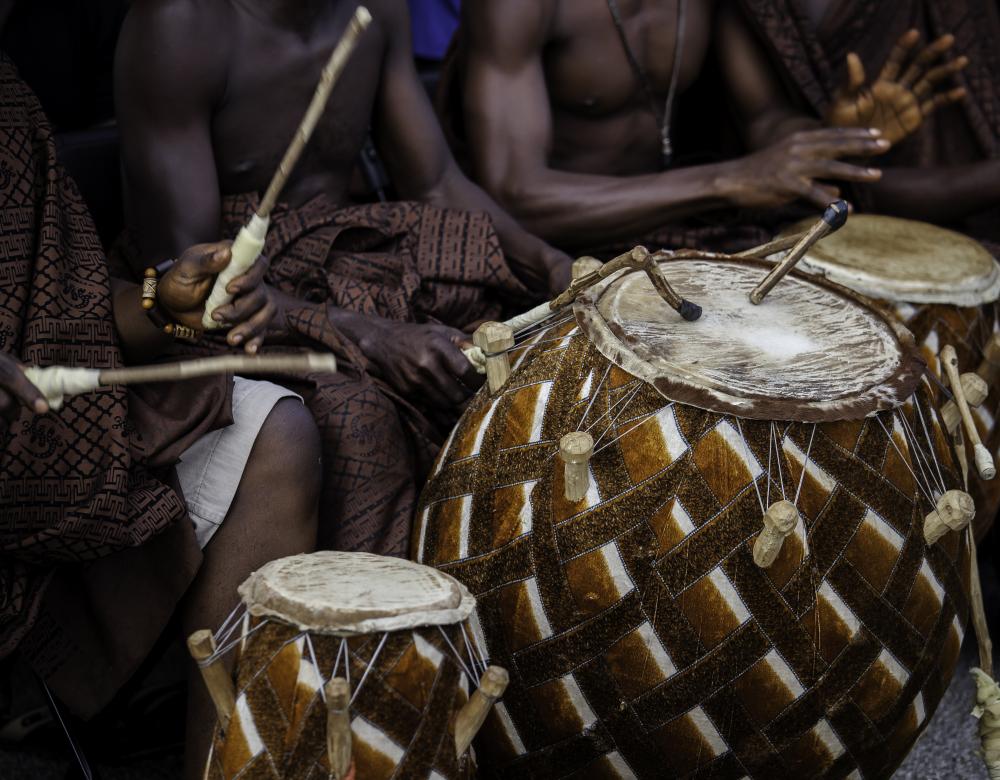 The science of tom-tom language called ‘bendrology’ deciphers drummed messages, especially in Africa. To understand those messages, one must know the language whose musical pattern they reflect. For instance, a drummed phrase “red invades the land” translated from Mooré, a language of Burkina Faso, announces imminent danger. So bendrology helps to reconstruct the history of a people by interpreting its sounds and rhythms. Frédéric Titinga Pacéré, the writer and first lawyer from Burkina Faso, has promoted this science and dedicated a museum to it.

In Africa, names have a soul

To name is to identify – and also convey a message to a community or group of insiders.

In Africa, beyond linguistic diversity, there are shared rules for naming people and things based on rationales only known to insiders. The name given to a child, event or place is not a random one: it is linked to a particular religion, history or culture. In Senegal, a child born after more than one miscarriage will be named ’Yaaxam’, a Wolof term meaning “stay alive or die if you want”, which is intended to ward off bad luck. Among Mossi people in Burkina Faso, they will be called ’Noaga (chicken) or Bouanga (donkey). The idea behind those names is to fool death into thinking the child is an animal. In some West-African communities, a second individual name is often a reference to the supernatural – the spirits of the water or sacred forest. It will only be spoken out loud when this person dies to open the door to the afterlife. Finally, a name can be a message to another member of the community. Among the Dogons of Mali or the Bwas of Burkina Faso, for instance, when the name Ni’o (bad person) is given to a child, it is aimed at an individual in conflict with the family. The name ’Telou (baobab) in Kabyè country (Northern Togo) means the person is invincible. To understand the meaning of a name, one must be part of a given cultural community. Among Togo’s Ewé people, for example, Esso means ‘horse’, but for the Kabyès, the same word refers to ‘God’.

Joking kinship, or a way to ease social tensions

To reduce social and political tensions, why not make fun of contentious subjects? That is the principle of joking kinship, which is present almost everywhere in West Africa. And no one is allowed to take offence, whatever the joke is. In Mali, which is affected by inter-communal conflicts against a backdrop of jihadi threats, the Bozos call Dogon food ‘horse fodder’, thus making fun of their diet. The Dogons retort that a Bozo is a ‘land fish’, the weakest creature of all, like a fish out of water. This ritual mockery brings communities together. A 2015 conference(1) held in Lomé, Togo, recommended its use to promote peace on the continent. The jibes are related to non-aggression pacts, for instance between the Bassars and Konkonbas in Togo. As the story goes, the ancestors of those two communities lived together in the savannah region of the north of the country, but their relationship broke down over sharing a dog’s head, which is used in certain recipes. The Bassars’ ancestor had to leave the region. Since then, the two groups have accused each other of being ‘dog-head eaters’ with the expression Ossangbangban. That benign teasing between the two communities strengthens their sense of a shared history. In 2014, joking kinship customs in Niger, which were institutionalised by presidential decree, were added to the UNESCO List of Intangible Cultural Heritage.

Orality preserved on the Web

Africanist researchers are creating more and more websites to store and present often little-known oral literary resources. The ELLAF website, dedicated to documentation and research on literature in African languages, publishes texts on oral tradition, such as a book of lullabies in Somali, or tales in various languages. Verba Africana has produced a DVD about the saga of Soundjanta, an account of the Malian Empire in the 13th century with two themes covered by Lansiné Diabaté, a Kela griot. Finally, Oralités du Monde is working to secure academic recognition for orality. It maintains a directory of specialised researchers and institutions. 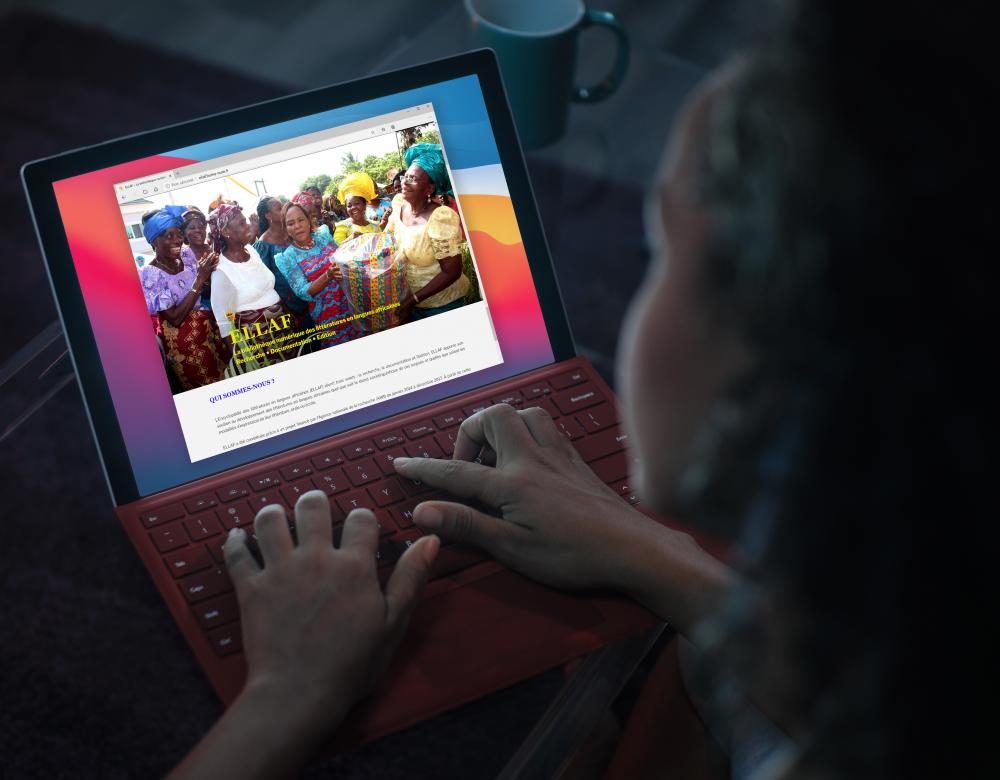 Digitisation at the service of African tales

Modern tools have brought a wider audience to African tales. Today, Africa’s iconic orality is no longer limited to storytelling around a fire with a limited number of listeners. With social networks, tales can be heard beyond their original cultural world. The famous Burkina-Faso storyteller Gérard Kientega Pingdéwindé (or KPG for short) understands this well. He tells his stories on his Facebook Live account every evening. They include ‘The Blacksmith’s Word’ and ‘The Village Monster’ tales steeped in Mossi culture. In the cartoon ‘Tales of Africa’ shown on the TV5 Monde youth channel, the character ‘Papa Nzenu’ (‘wise old man’) crosses African countries – Cameroon, Mali and the Democratic Republic of the Congo – to tell his stories. In Mali, Radio Parana follows the same tradition: it records tales during the dry season and then broadcasts them for 30 minutes every Sunday evening. The Afrikan Echoes application aims to further widen the audience for the modern griots. It takes stories in their original tongue and translates them into the most common languages of the continent, such as Yoruba, Amharic or Swahili. It is another way of promoting the heritage all across Africa. 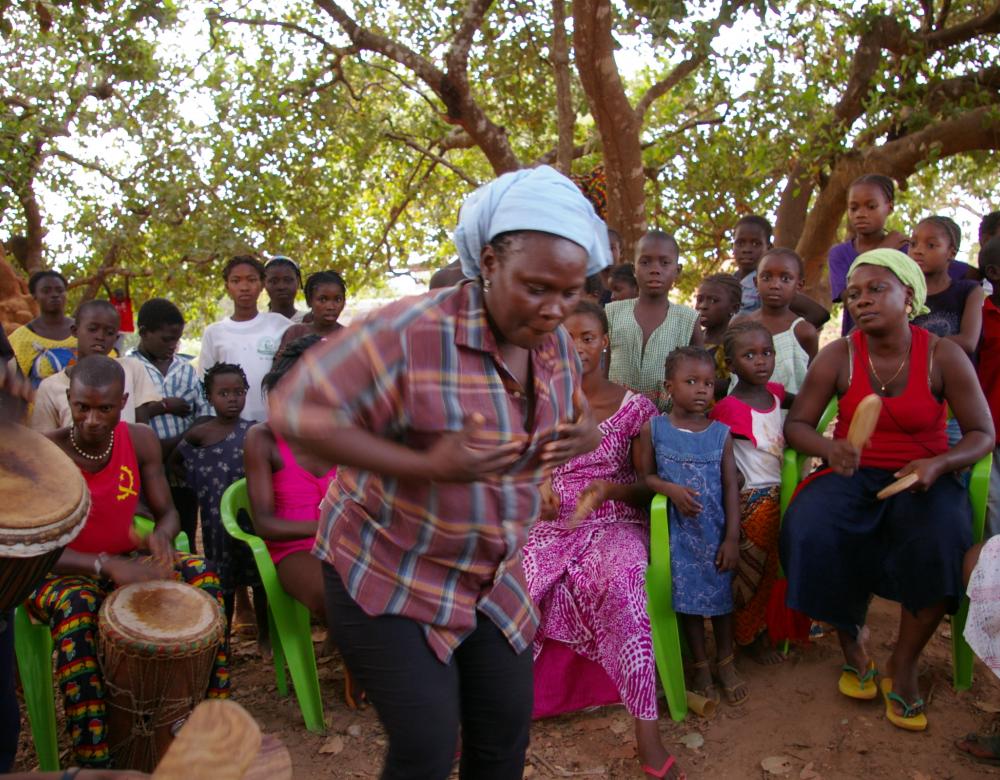 Songs of criticism and peace

Mandjuandadi, which is one of the women’s circles that meet in Guinea-Bissau, allows anything to be discussed, be it subjects of dispute, disappointments in love, or political messages. And those questions are all settled in that circle. Things have been that way since colonial times, when those generational groups, which were free from ethnic or religious barriers, first appeared. They allow women to take a break from their everyday lives and speak out. Women who belong to a Mandjuandadi wear the same panu di pinti (combed cloth), which is a sign of membership. In their circle, they set a beat with their hands and a tina (a hollow gourd in a bucket of water) and sing cantigas de ditto – critics’ songs – while improvising dances together.

Africa in the age of words 2.0

Messaging applications are new media for African orality. They are beginning to provide services in local languages.

Nine of the ten least literate countries in the world are African. Penalised at the start of the digital era, the populations of those countries have now found their place on social networks by recording audio messages, the equivalent of Europe’s SMS texts. It is no longer necessary to be able to read or write to enter a telephone number and make a call. On the continent, more and more social media are emerging, including Massolo in the DRC, Kingui in Mali and OnDjoss and Lenali in Cameroon. Their challenge is to compete with WhatsApp, which is the most widely used application on the continent. WhatsApp has become popular by adapting to African realities. It works even with low bandwidth and on low-end mobile phones. There has been a rise in the number of initiatives. Lenali, for instance, offers a local-language version to make smartphone use easier for the illiterate. Whether they are African or not, these technological innovations encourage oral communication and make it easier to distribute messages. At the end of 2018, sub-Saharan Africa had 456 million mobile-phone subscribers according to the GSM Association.

Slam as self-expression of youth

Young people, who were formerly obliged to listen to their elders, speak out today. How do they do it? They turn to slam, which unlike storytelling is mainly for the youngest people. It helps them express their convictions, ambitions and emotions. Africa, which is a continent of oral tradition par excellence, has embraced that new form of poetic expression originally coming from the United States. This has been shown by the Africa Cup of Slam Poetry organisation, whose second edition is announced for November 2021. 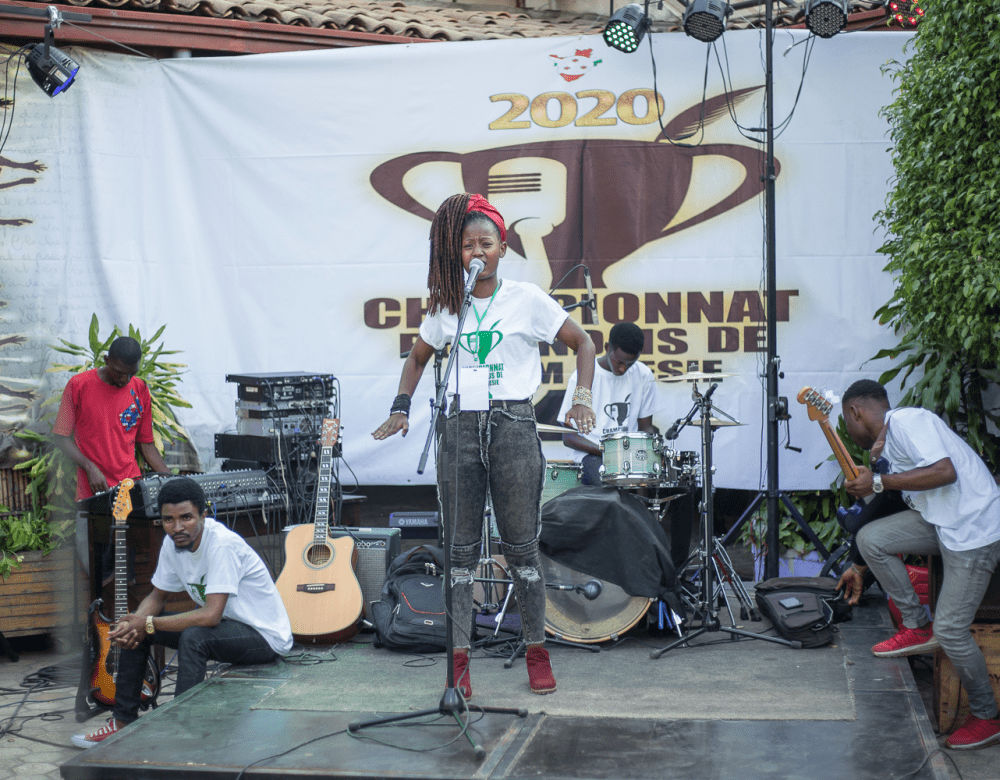 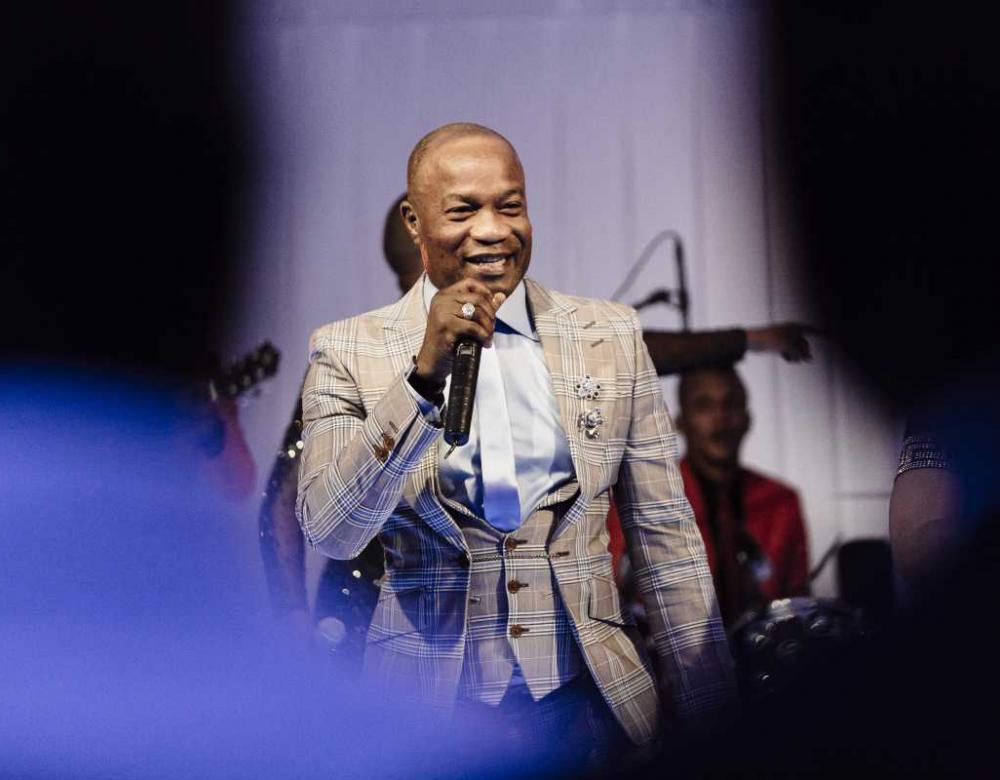 Mabanga, a new form of the griot’s art

In the Democratic Republic of the Congo, artists, such as Koffi Olomidé, are paid to include the names of individuals and companies in their songs. Known as mabanga – from the term ‘throw the stone’ in Lingala – this style follows on from the griots’ songs of praise. In this respect, it is an adaptation and reinvention of Congolese artists’ traditional orality. Congolese politicians take advantage of mabanga to boost their reputation.

Sketch performances encourage people to identify with the situations they portray and make it easier for them to adopt preventive guidance.

In Burkina Faso, the humourist and director Gérard Ouédraogo, aka ‘His Excellency Gérard’, worked with young actors to produce a play on Covid-19 in October 2020. The performance took place at the theatre Atelier du Rire (Laughter Workshop) in Ouagadougou to raise awareness of preventive measures among the population. In Rwanda, Ishiringo community radio broadcast plays on the same subject, which were performed by schoolchildren. In the DRC, to curb the spread of the Ebola virus, which claimed more than two thousand lives in 2018, the Vision de Beni theatre company presented tragicomic sketches denouncing dangerous behaviour and reminding everyone of their responsibilities. Known as ‘development’ theatre, this genre encourages audiences to identify with the concrete situations that are shown to ensure they will follow prevention advice more closely. Jacob Yarbatioula, a sociologist and teacher-researcher from Ouagadougou underlines that oral tradition remains the most common way to convey awareness messages.